What’s holding back the spread of your ideas?  The problem may be that you know too much. 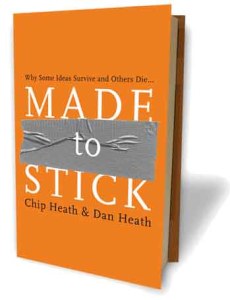 For entrepreneurs, the ability to inspire, motivate and evangelize is critical. It’s a 24/7 job. In “Made to Stick,” the Heath brothers have developed a helpful formula to rate how likely your message is to be remembered – and how effective its call to action is. Better still, they show you how to improve both.

It’s a model that was developed by analyzing proven and effective messages – from Aesop’s fables to education lesson plans and advertising messages – and explains why the brain needs particular elements to hold on to an idea.  It’s practical and it helps improves your ability to define a message to get people’s attention and convince them to take action.

Both authors seem imminently qualified to comment: Chip is a professor of organizational behavior at Stanford Business School, and has spent 10 years researching and teaching the issue.  Dan researches the new media textbook market at Harvard Business School and has spent years looking at how to most effectively communicate ideas to students to make them ‘stick’.

Big ideas from “Made to Stick”:

The Curse of Knowledge – This is the prime culprit in non-inspirational communication.  The more you know, the worse you are at spreading the word. That’s because it’s very difficult for an expert to think like a novice.

To correct this, you need techniques that force you to speak the language of the novice. Also, the more you know on a topic, the more your brain shifts into abstract thinking. You can process ideas at a higher level, but novices need concrete information to understand, believe, get engaged and take action.

“Succes” – This is a simple acronym for the authors’ checklist:  Simple, Unexpected, Concrete, Credible, Emotional and Stories.   You don’t need all six characteristics, but the higher you score, the greater the impact.  Among the highlights for each:

I use most components from “Made to Stick” in different areas to help fellow founders communicate their ideas. As an example, when we speak about using bootstrapping to create a market leader we don’t quote statistics.

Instead, we ask ‘What do Microsoft, Dell, Cisco, Ebay and Siebel all have in common?   Answer: They were all bootstrap financed to between $5 and $60M in revenue.’   The message is unexpected and on point.

My favorite use of the principles is story spotting.  I love hearing about how other entrepreneurs started and built their businesses.  To me these stories are inspirational – particularly those that did it with modest sums of capital, relying on their own abilities.

At a glance:
Title: Made to Stick: Why Some Ideas Survive and Others Die
Authors: Chip Heath, Dan Heath
Publisher: Random House
Length: 291 pages