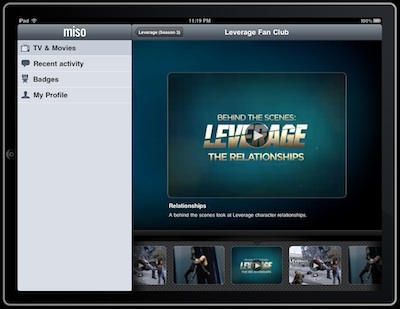 When San Francisco startup Bazaar Labs launched its Miso application in March, the easy shorthand for describing the app was “Foursquare for movies and TV.” In other words, it used the check-in model popularized by location services like Foursquare as a way for people to tell their friends what they’re watching.

To give users more incentive to check-in, Miso also borrowed Foursquare’s badge concept, so that users win different badges based on what shows they say they’re watching. Now the company is extending that idea with its new “fan clubs.” After a certain number of check-ins (Miso will only say that it’s “somewhere between 1 and 1,000,000”), fans of certain shows will get more than a badge — they’ll get access to special content like photos, video clips, trivia, quizzes, and games.

The first partner for this effort is the TNT show Leverage, which held its season premiere on Sunday. It’s not exactly clear when the fan club feature will be available on the iPhone app, since Apple has to approve the update, but it’s already available on users’ desktop browsers through the Miso Web app.

When he told me about the concept, chief executive Somrat Niyogi emphasized that the company is still experimenting to figure out what kind of content would be most exciting for fans. Most likely, it will differ from show to show. He declined to say whether TNT is paying for the promotion, but it seems like this feature offers more opportunities for audience engagement than a sponsored badge, and thus more revenue opportunities for Miso.

It’s also important for Miso to go beyond badges because it’s starting to see some competition, with sharing application Glue coming to the iPhone yesterday, complete with badges, or rather, “stickers.”

Miso also just launched on the iPad. That’s an obvious step for an iPhone app, and Miso had already said this was part of its plans. But Niyogi told me the iPad is a key part of the company’s strategy, because it’s a compelling “second screen” to use while watching your favorite show. As evidence, he pointed to a recent survey of 150 iPad users, where 98 percent of the respondents said they use the iPad while watching TV at least once a day.