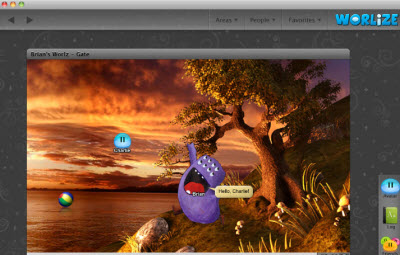 Worlize has created a social gaming and chat platform that users can modify to create their own custom two-dimensional games, and now it is expanding its team to pull together its formal launch.

A couple of weeks ago, the Los Angeles-based company announced its private beta launch for the platform on Facebook, Twitter, MySpace and Open Social. It also announced an angel funding round.

User-generated games have been quite a craze on the PlayStation 3, with Sony’s LittleBigPlanet and ModNationRacers titles. The question is, will they take off on social networks such as Facebook.

The company plans to publicly launch the platform this fall. With Worlize, beginners can point and click with a mouse to create games such as puzzles, time management games, card and board titles, and casual strategy games. Users can create their own games and see them implemented. On top of the mass market tools, Worlize is also creating an applications programming interface for launch this summer for professional game developers.

Worlize believes social games have taken a formulaic approach to the market, as created by game companies. Now it’s time for users to take control and define their own casual and social game experiences, said Brian McKelvey, the company’s chief executive.

The company has five employees. McKelvey was previously designing games and apps for Paramount, Sony Pictures, Lionsgate and Live Nation. Diller also came from the film industry, while Sansoy previously led the development of massively multiplayer online games and virtual worlds. He was an executive at Animax and Game Show Network. Sansoy will help the company expand its cloud-based platform.

The company was founded earlier this year and competes with such social game players as Playdom and Zynga. The company has raised $150,000 in seed funding from investors including Diller.