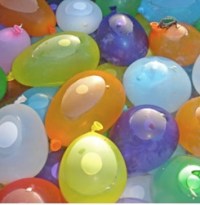 Location Wild, a week-long competition to create a location-based application from scratch has come to an end in London, England. The winner is a 19-year old Bath University student called Thomas Fletcher, who created a virtual waterfight game called City Warfare, which piggybacks on the hot “check-in service” Foursquare. Fletcher walked away with $2,500 and an iPad.

City Warfare is a text-based game played in real-world locations. The idea is to use waterbombs and waterpistols – all virtual – to “soak” players who check in at different locations using Foursquare. Players can booby-trap locations with virtual waterbombs, or balloons filled with water, in places they think will attract many check-ins on Foursquare and trigger them remotely, or have them burst when a timer runs out. Players earn credits for each player they soak, and those credits can be used in-game to buy upgrades to the aquatic weapons.

Fletcher coded the application in one week, obeying the rules of the competition. Says Fletcher: “The timing was good because I had just finished the last of my exams, and I thought, ‘Why not spend a week giving this a go?’” And, obviously, it paid off for the young student.

The jury consisted of Direction Magazine’s Adena Schutzberg, The Next Web’s Chad Catacchio, Slashdot’s Rob Malda, and TechCrunch’s Erick Schonfeld. The competition was put together by a new location-based company from London called NakdReality, to stimulate innovation among location apps, according to NakdReality CEO Paula Abrahamson.