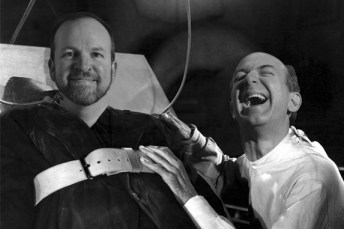 Woot CEO Matt Rutledge posted this doctored photo of himself and Amazon.com founder Jeff Bezos as part of a very funny blog post announcing that Amazon has bought Woot for an undisclosed price. Rutledge says that Woot will continue to operate mostly independently and without change, similar to Amazon’s previous acquisitions Audible and Zappos.

Woot, which Rutledge founded in 2004 in Carrollton, Texas, offers exactly one deal per day on the site, usually of a gadgety / consumer-electronicsy nature. Today’s deal is a 1/3 price reduction on Apple’s iPod Nano, marked down from $149 to $99.99. The site uses offbeat humor in its product descriptions and other communications. Typical example: “I furtively started my forklift and slipped out with the misplaced Nano stash. I felt eyes peering at me from every shadow in the darkened streets, but that was probably just the Red Bull.”

Woot’s Internet-culture sass has paid off. Business Insider reports that the company reported $164 million in sales for 2008.

In an FAQ section, Rutledge wrote that Woot’s staffing will go untouched, as will its privacy policy. Like Zappos CEO Tony Hsieh, Rutledge expects to stick around wisecracking on the company blog after the deal is closed.