A Nielsen study which tracks 60,000 U.S. phone bills every month says that most smartphone users don’t take full advantage of their phones’ data features. A small fraction of customers account for most of America’s data network traffic, while one in four users doesn’t use data services at all — “exactly zero MB per month.”

As it turns out, one in three smartphone users doesn’t have a data plan. “Most of these … users were among the first to get these devices, before operators required a data plan be added,” Nielsen telecom analyst Roger Entner wrote in a blog post about his team’s findings.

The conclusion for most smartphone owners is that AT&T’s new data plans, which replace flat-rate pricing with a pay-for-what-you-use agreement, are actually better. Most customers paying flat rates don’t use anywhere near the amount of data traffic for which they are paying.

As for the wireless industry, Entner thinks they will need to educate customers if they expect to sell more data services. “Operators have to do a much better job in conveying the value and utility of these powerful devices,” he wrote, “and to marrying the right device to the right customer.” 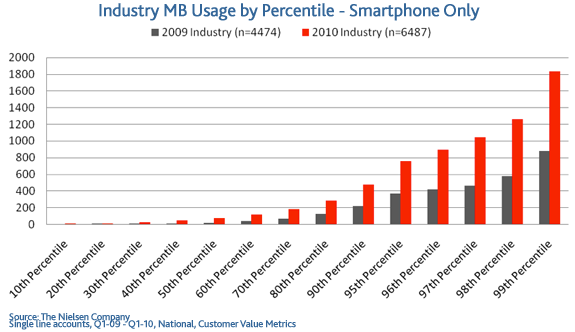