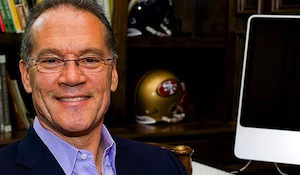 It’s the year of the superphone. And there’s no carrier that profited more from jumping on the trend of supercharged computers in your pocket than AT&T, whose bet on Apple’s iPhone in 2007 is still paying off. That’s why we’ve invited AT&T CTO John Donovan to speak at MobileBeat 2010, VentureBeat’s industry-changing mobile conference being held on July 12-13.

Donovan’s speech and Q&A session with Matt Marshall will be a must-see for a host of reasons. Sure, Matt may complain about dropped calls or leaked email addresses. Donovan’s the man to talk to about that: He oversees network operations and security. But he’s also in charge of AT&T Labs, which means he’s the one who’s going to find technological solutions to the problems AT&T faces.

And he’s also an entrepreneur and Silicon Valley veteran, having sold InCode Wireless to Verisign and then run that company’s product, sales, marketing, and operations as a senior executive. In other words, he’s not just fixing AT&T’s network. He’s positioning the company to capture all the opportunities ahead as superphones become mainstream — and need supernetworks to match.

Donovan believes the stage is set for yet another wave of expanded apps, services and capabilities in the years to come.  In his view, the emergence of mobile broadband, unified Internet-protocol networking and video are combining today to enable virtualization, which is poised to dramatically expand possibilities for new apps and services.

*We’d like to thank the mobile industry leaders that are supporting MobileBeat 2010, including GetJar, Placecast, Greystripe, Qualcomm, and Microsoft as Gold Sponsors, AdMob, OpenMarket, Navteq, MasterImage 3D, Symbian, and Dehood as Silver Sponsors, and Nexage, Offerpal, Marvell, Verizon, and Mobclix as Event Sponsors.

For all conference details, including speaker and agenda updates, click here.