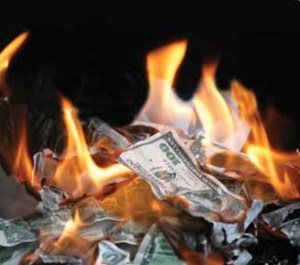 It looks like this is the end for Wesabe, a personal finance startup backed by O’Reilly Alpha Tech Ventures and Union Square Ventures.

According to a note from chief executive Marc Hedlund posted today on the Wesabe site (and spotted by TechCrunch), the company plans to shut down most of the service on July 31 and is announcing the news now so that users have time to remove their data. The “Groups” area, which is basically where users can talk to each other, will continue to operate because it’s cheap to host and because one of Wesabe’s customers has agreed to fund it.

In recent months Wesabe has been operating on a shoestring budget, with support from some of the developers and operations people who made up our core team. While the site has remained online and we continue to hear from people who find it helpful, we have not been able to provide the support people need to use it for something so central as financial management. I’ve felt especially terrible that some members have a good initial experience but then hit a problem, often after investing many hours, and aren’t able to get help with it. That’s obviously a bad experience, and not what we want to offer. Also, because Wesabe stores such highly sensitive data, continuing to operate the service with shoestring operations and security staff is not acceptable, and we do not want to continue accepting new accounts if we cannot guarantee the security level we believe our service requires.

I’ve spoken to Hedlund a couple of times in the past, and each time he tried to position Wesabe as the finance startup with stronger technology, compared to more popular competitor Mint.com, which was all about a slick user interface, and which initially used another startup, Yodlee, for much of its bank integration. (Mint was acquired by Intuit last year.) It looks like Wesabe’s approach wasn’t enough to win over users.