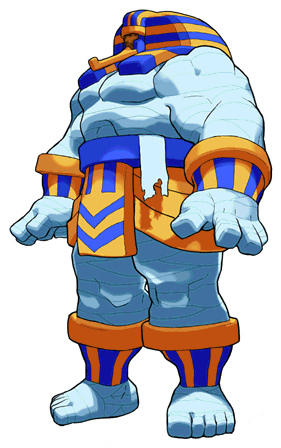 I’ve written before about my love of the Darkstalkers series of fighting games and its outrageous cast of characters. Drawn from classic horror movies and mythology, the roster was unlike anything seen in other games at the time. I was in college when the original Darkstalkers was first released in the arcades and I played it religiously to the point that I felt confident in my ability to win with all of the characters.

All but one, that is – Anakaris. The mummy.

In a game of unique combatants, he was truly the most head-scratchingly odd one of all. Most of Darkstalkers’ playable characters were analogous to Street Fighter 2 characters: Demitri & Morrigan were Ryu & Ken, Felicia was Chun-Li mixed with Blanka, Victor was Zangief with a touch of Dhalsim, etc. They certainly looked different but Street Fighter veterans could easily understand their moves.

Anakaris fit no mold. He was a giant who lumbered slowly with each step (like a mummy shambling out of its tomb) yet he could leap into the air and float across the screen. He could swallow projectiles and spit them back at his opponent. He had no close-range grapple moves (a fighting game standard) but instead had a long-range one – extremely rare, even today.

As if that weren’t enough, Anakaris changed shape as he fought. Jumping made his legs disappear, leaving him as a flying torso. For a quick landing, he could form himself into a pyramid and come crashing down. When crouching, his punches turned his arms into spinning columns that rose from the ground. His strongest standing attack was a two-fisted “cobra strike” that had him weave his arms together into one long, snake-like appendage that had tremendous range.

Anakaris made no sense. Anakaris confused the hell out of players and opponents alike. Anakaris quickly became my favorite character in the game.

For every other fighter in Darkstalkers, I developed and then clung to a clear-cut strategy for winning. I’m no expert but after trying all the moves I would settle on a few patterns/combinations that served me well and use them again and again. I still remember my Bishamon plan: stun with the ghost-fireball, then slash away.

When it came to Anakaris, things were different. I never found one pattern that worked. Sometimes I kept my opponents far away, hurling sarcophaguses (sarcophagi?) at them to pin them in the corner. Sometimes I abused the magic throw. Sometimes I just used the cobra strike over and over. It was as if not even I knew what Anakaris was going to do next, and I was the one controlling his every move. Win or lose, it was all so much fun.

Anakaris perfectly represents my paradoxical relationship with fighting games: I enjoy them because they are so unpredictable yet my own performance is anything but random. Anakaris was so damn weird that I had no choice but to simply enjoy myself rather than figure out how to win. This makes him not only my favorite Darkstalkers’ character but puts him in my top five video game characters of all time list.

But you don’t have to take my word for it – try him yourself! Anakaris is one of the few Darkstalkers fighters to appear in Marvel vs Capcom 2 (currently available on XBLA and PSN). He’s a lot tougher to win with now, given that game’s turbo-speed action and sky-high jumping, but his core moves and unusual animations are still there. If anything, his new moves are even weirder.

Speaking of Marvel vs Capcom, if anyone on the development team is reading this please consider Anakaris as a character for next year's Marvel vs Capcom 3. I know Morrigan is already confirmed but really, she’s just a sexier version of Ryu. Anakaris is unlike any other character in your company’s history. Don’t seal him away in the tomb of obscurity.

Daniel Feit was born in New York but now lives in Japan, where he teaches English to Japanese children and writes for Wired Game|Life and Film Junk. Follow him on Twitter @feitclub or visit his website, feitclub.com.