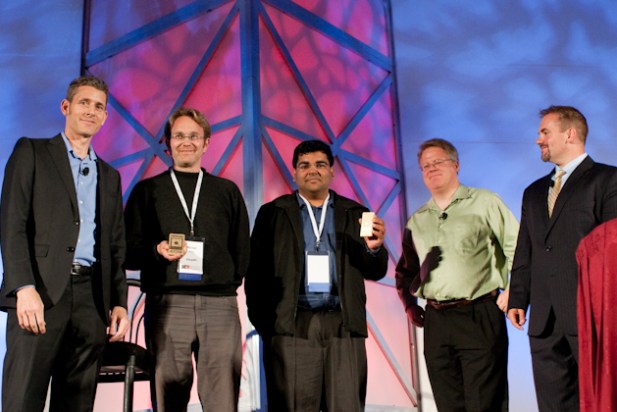 The companies were selected from a field of 10 companies in each category, not to mention the more than 100 startups who applied to compete.

EduPath just launched in the Apple App Store today, providing students with the tools they need to get high scores on the SAT and LSAT entrance exams. The application itself includes much of the content that can be found in test preparation books published by the Princeton Review, Barron’s and Kaplan. That’s a million dollar business every year that EduPath hopes to capitalize on.

The real value add of the application is that it is so portable. Students can practice math problems and memorize vocabulary words with flashcards while they are on the go — on the school bus for example, or waiting in line. The idea is to make studying and test prep a more organic part of life, which will in turn improve scores.

“We think it will fundamentally change education,” said EduPath founder Michael Weiler (pictured second from left above). “We hope you’ll follow us from here.” Certainly, this is a glowing debut for the company.

Micello, on the other hand, has the potential to fundamentally change the way we think about virtual and mobile maps by adding indoor schematics. Founder Ankit Agarwal made the point during his presentation earlier today that we’ve gotten so used to maps of our streets and external environments that we’ve totally neglected mapping interiors of important and public buildings like airports, shopping malls, convention centers and the like.

Initially, the judges questioned how accurate these maps could be, and how possible inaccuracies could hurt market share — but obviously these concerns didn’t outweigh Micello’s utility.

The company just snagged its first major customer: Singapore-based carrier Singtel. It says it has several other similar partnerships in the hopper. While Agarwal anticipates Micello coming into competition with Google Maps and Navteq, he says that these services may end up licensing his company’s technology before they attempt to build their own version. Winning the Tesla Award certainly puts it on the right track.