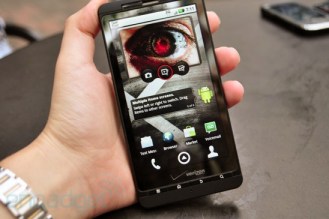 John Ellis, director of software and services for Motorola, said the handset manufacturer was happy with its big bet on Google’s Android platform.

“We doubled down on our bets with Google. We’re happy about it. Sanjay is raving about it,” Ellis said of the company co-chief executive Sanjay Jha. Jha said last week that the only thing holding back better mobile phone sales were supply constraints.

Two years ago, Motorola was servicing about 17 platforms. Its cellphone unit then shifted to focus on high-end smartphones, bolstered by Google’s mobile operating system, after losing about $5 billion over the last three years.

“The complexity for us was monstrous,” Ellis said at the MobileBeat 2010 conference today in San Francisco. “We would have internal development paralysis because we were afraid of breaking anything.” The company is prepping two more phones for a July release on Verizon following the success of its original Droid phones.

Ellis said the company wasn’t too worried about putting all of its eggs in one basket with Android.

“I don’t know if we’re necessarily paranoid about it,” he said. “Certainly, we’re very conscious about it.”

Other panelists agreed that they, too, would benefit from sharpening their focus to a handful of platforms.

“Over time, we believe that for developers to have consistency on how they make money, it will be easier if there are [fewer platforms] and consolidation,” said David Ko, senior vice president of Yahoo’s Audience, Mobile and Local businesses.