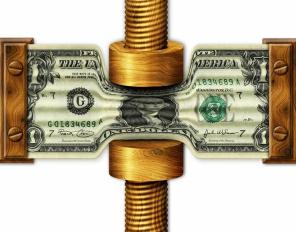 Much has been written about the incredible, shrinking venture capital industry lately. Funds and deal sizes are contracting. And the number of deals and even firms continues to fall.

Nothing illustrates this fact better than the steep 49 percent drop in total funds raised by venture capital firms during the first quarter of 2010. The $1.9 billion raised is the lowest sum in seven years, according to a report issued earlier this week by the National Venture Capital Association and Thomson Reuters.

Now results of the 2010 Global Venture Capital Survey conducted by the NVCA and Deloitte have made this shrinkage in the U.S. all the more clear — but it also shows how venture capital is on the rise in emerging markets like China, India and South America. In all, 500 venture capitalists were surveyed.

– 92 percent of U.S. respondents expect the number of VC firms to drop between now and 2015. European and Canadian VCs also expected their industry to shrink, while their counterparts in China (99 percent), India (85 percent) and Brazil (97 percent) all anticipate growth in their number of firms.

– U.S. respondents attributed the contraction in the country to a lackluster IPO market (despite news two weeks ago that IPOs hit their highest point in three years in Q2 of this year, with 17 sales), as well as unfavorable tax and regulatory policies (like prospective taxes on carried interest). Most U.S. respondents also believe that not as many limited partners will be interested in sinking money into U.S.-based venture capital firms going forward.

– Investors in China, India and Brazil almost all believe that limited partners will continue to invest heavily in venture capital in their regions — suggesting that LP dollars may not necessarily be migrating from VC in general, just shifting geographically.

– In the U.S., 88 percent of respondents said their industry was shrinking due to the difficulty of achieving successful exits; 59 percent blamed unfavorable tax policies, and 53 percent pointed to an unstable regulatory environment. As the NVCA/Deloitte report points out, none of these issues presented a problem five years ago when the survey asked similar questions.

– European, Canadian, Indian and Israeli respondents all said the weak IPO market was perhaps the most influential factor putting a damper on global VC. Brazilians were more concerned with tax policies, and Chinese investors singled out their country’s regulatory environment as a major hurdle to expansion.

– Despite these challenges, China and India were much more optimistic about company valuations than their peers in the U.S. and Europe. 62 and 68 percent, respectively, say they expect valuations to go up over the next five years. To get a sense of the pessimism elsewhere, only 32 percent of U.S. respondents and 10 percent of Israeli respondents predicted an upswing in valuation.

– On the more promising side of the coin, more than half of U.S. and European investors said they thought that the number of venture capital deals would increase over the next five years. This is also indicative of how deal sizes are expected to dwindle, with more firms looking for more capital-efficient plays in their areas of focus — like cloud-based software for enterprise, and IT solutions for energy efficiency in the green sector.