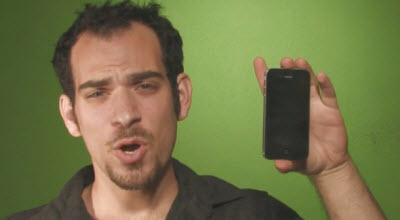 Apple showed this funny music video about the iPhone 4’s reception problems at its press event today. Steve Jobs said he saw the video this morning and had to show it to the press as well.

It helped set a lighter tone to the beginning of what could have been a fairly tense meeting between Jobs and the press. At multiple times, Jobs expressed his disdain for the press that tears companies down in the hope of getting more page views. But he cracked plenty of jokes as well, and I can imagine Jobs himself singing the chorus to this song, “If you don’t want an iPhone 4, don’t buy it.”

It’s good to see that Apple isn’t clueless when it comes to defusing a battle with the press.