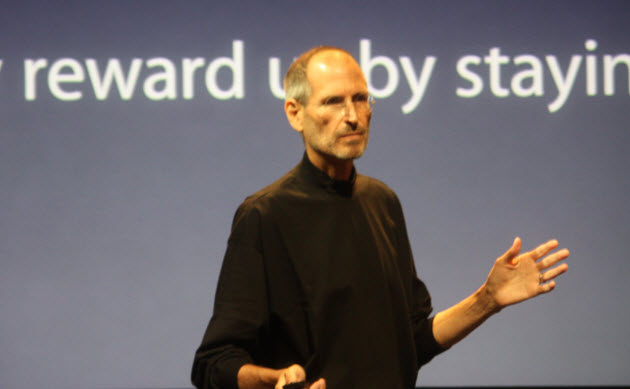 Apple’s Steve Jobs said “We aren’t perfect” as he opened a press conference today at Apple’s headquarters in Cupertino, Calif.

He acknowledged “antennagate,” or the fact that Apple’s iPhone 4 has exhibited dropped calls when held in what has been nicknamed the “death grip.” He also apologized to users and promised to “work our butts off” to get their confidence back. 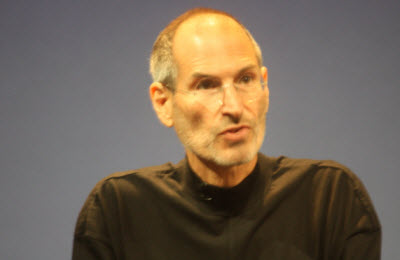 The special press conference is unique in Apple’s history, and the antenna problem is a big deal because Apple has now sold more than 3 million units in 22 days, making it Apple’s best-selling phone ever. He said Apple would give away a free rubber case to every user, helping to reduce the reception problem, through September 30. On top of that, Apple will give a full refund to anyone unhappy with the phone within 30 days of purchase. Anyone who bought a bumper or case from Apple (usually $29) can get a refund.

“This is life in the smartphone world,” Jobs said as he explained that most popular cell phones have the same antenna problem, from BlackBerry to Samsung models. He showed filmed demos that showed a number of other phones lose their signal when held in a certain way. 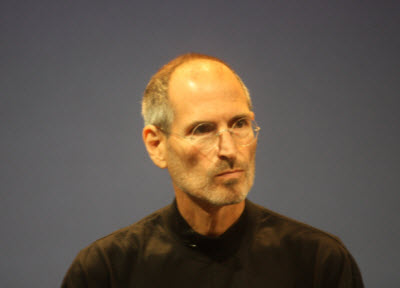 Consumer Reports said Monday that it could not recommend the iPhone 4 because of the problem of calls being dropped when the phone is held in the wrong way. That added to a wave of criticism about how Apple was handling the iPhone 4 problem and whether it should recall the device. Jobs said the data Apple has collected so far did not warrant a recall. Analysts have said that if Apple had to do a recall, it would have cost $1.5 billion.

Jobs said the company takes antenna design seriously. He said Apple has 17 anechoic chambers, 18 PhD scientists and engineers, and a $100 million investment in its antenna research. He said the company hasn’t had its head in the sand on the reception issue.

“Smartphones have weak spots,” he said. 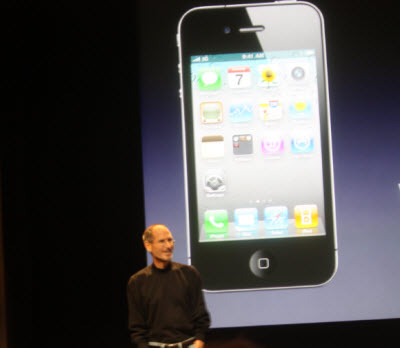 Jobs said he has his own pet theory. He said that about 20 percent of people bought a rubber bumper case with the iPhone 4, a lower percentage than in the past because of a shortage of the bumper cases. Apple changed the phsyical form of the iPhone 4 compared to the iPhone 3GS, so the old bumper cases won’t work. You put these things together, Jobs said, and this is what you get: smartphones have weak spots, a small number of owners have called to complain, return rates are smaller, and dropped calls are not huge. As a result, Apple’s conclusion has been that there are a small percentage of users with a problem. 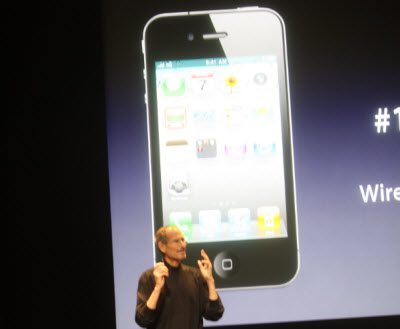 Jobs said he has gotten 5,000 emails from people who say their iPhone 4s are working perfectly. But he said he cares about every user, even if the data says this has been blown out of proportion.

“It’s fun to have a story, but it’s less fun when you’re on the other end of it,” he said.

Yesterday, Apple released its iOS operating system 4.1, fixing the problem the iPhone 4 has had with the number of signal bars displayed. While Apple will give out rubber bumpers, he said the company can’t make them fast enough. Apple will recommend bumpers made by others.

“We love our users,” Jobs said in closing. “When we fall short, we try harder. And when we succeed, they reward us by staying with us.”

Jobs spoke for about 15 or 20 minutes and then broke into a long question-and-answer session in the auditorium on Apple’s campus. The first question from the press was off topic. Asked how his health was, Jobs said he was fine. He said he had come back from vacation in Hawaii to be at the event.

No one noticed similar problems with the iPhone 3GS. But this time around, Jobs said Apple “waved a red flag in front of a bull” by putting a line on the iPhone 4’s metal band that made people want to hold it in exactly that spot. It turns out holding the phone in that spot can cause reception to drop and calls to become disconnected.

Asked if he would apologize, in light of what has happened to Apple’s stock price, Jobs said he apologized to Apple’s customers who have the problem. But he said he had no apology for short-term investors who are angry the “stock has dropped $5.” 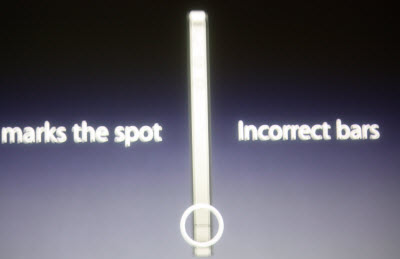 The press conference included some humor. At the beginning, Apple played a video from YouTube that made fun of those who are blowing the iPhone 4 reception problem out of proportion. Jobs said there would be no software fix to deal with the attenuation of signals.

In reference to a Bloomberg Businessweek story that alleged Jobs knew about the antenna problem and ignored it, he said, “That’s a crock.” He said that no one came to him and said the phone had antenna problems, though he said the topic may have been debated among antenna engineers. Jobs said he himself does not carry an iPhone 4 with a bumper. Apple also disputed a New York Times story that said a software fix was possible.

“We are not perfect,” Jobs iterated. “We are a band of people, working our asses off to delight our customers. ”

Asked what Apple would do differently in the future, Jobs said he needed to get some distance from the problem first. He also said Apple knows it cares about its customers and will take care of them.

“We were stunned and upset by the Consumer Reports stuff that came out this week,” he said. “But we knew we would take care of our customers. It’s only been 22 days. We only got the dropped call data three days ago.”

He said Apple couldn’t have worked harder on this problem. But he added, “When one organization gets successful, there are others who want to tear it down. I see that with Google. I see some of those people jumping on us now. Would you rather we were Korean companies rather than American companies? Of course we are human. Of course we will make mistakes. Sometimes, I feel, in search of eyeballs for these web sites, people don’t care what they leave in their wake. I look at this whole antenna gate thing. Apple has been around 34 years. Haven’t we earned the benefit of the doubt from the press? This thing was blown so far out of proportion.”

Asked whether Apple thought about a recall, Jobs said, “We are data driven. That is the way we work. We do whatever it takes to take care of our customers.” He said Apple engineers visited customers who had problems.

Tim Cook, chief operating officer, said the company would talk about the financial impact of providing bumpers to customers in its earnings call next week. Jobs said the company could not keep up with demand on the iPhone 4 and that it continues to be the company’s most successful launch in spite of the bad publicity about the antenna problems.

As for communicating with users or the press, Jobs said he has always replied to some customer emails and only recently have users started posting the replies, which Jobs said he considered to be “a little rude.” And he said, “The most recent phenomenon is some people are making them up. Don’t believe everything you read.”