Venkatesh Rao is an entrepreneur-in-residence in the Xerox Innovation Group and manager of the Trailmeme project.

Nicholas Carr, a writer devoted to exploring the social and business implications of technology, came out with his latest book last month. It’s called The Shallows: What the Internet is Doing to Our Brains and is a book-length elaboration of his much-discussed 2008 Atlantic feature, “Is Google Making us Stupid?.” It’s a must-read for Web technologists — not because Carr’s so right, but because he’s so wrong.

If you don’t have good answers to the questions Carr raises, you aren’t thinking hard enough about what you are doing. The book extends the modest and relatively defensible argument of the article into an ambitious and fatally-flawed one. But the flaw is not obvious or superficial. It is not a simplistic Luddite argument. Carr goes wrong in deeply illuminating ways that helped me clarify my own thoughts about the emerging Web of Intention. To use a phrase coined by Dan Pink, Carr has made an “excellent mistake.”

Carr’s argument is roughly this:

1.    Our brains are plastic; they change based on how we use them
2.    Today, we are increasingly using our brains for shallow online skimming rather than deep reading
3.    The parts of our brain that are good at multi-tasking, skimming and surveying are getting stronger (he calls this the “juggler” brain)
4.    The parts of our brain that we use for deep, immersive book reading are getting weaker, and the corresponding neural resources getting redirected
5.    As a result, we are changing, and on the whole, getting stupider.

When Carr’s article first appeared, I enthusiastically co-opted it into the pitch for Trailmeme, the beta project I manage at Xerox. Trails — intentionally crafted paths through Web content — allow you to recreate part of the book experience, without losing the Web experience. Carr’s argument was perfect PR ammunition. Or so I thought. 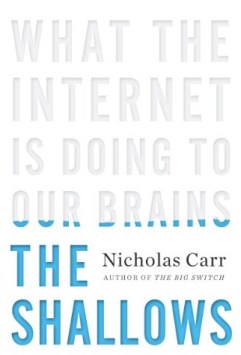 Carr’s book has added a lot more detail to the arguments he made in his initial article, and situated them within a historical context. But the big change is a significant shift in emphasis, one that has made me change sides.

Reading The Shallows had me going, “Whoa! wait a minute!” Unlike the article, the book adopts a hardliner stance and takes aim squarely at the very idea of a hyperlink. The book has even triggered a movement to rein in our wanton link-love way of life.

I have a problem with this.

I love hyperlinks. I am deeply excited by (and have raved about) the potential of the hyperlink as an artistic medium. I have devoted three years of my life to thinking about hyperlinks. So I am an interested party, but I am going to try my best to be fair here.

The flaw in Carr’s thesis is due to a major contradiction that he does not talk about. If every new media technology, from the written word onwards, has made us stupider, how is it that the effective collective intelligence of the human race keeps going up? Between Plato’s time and today, we’ve managed to land on the Moon and clone Dolly, the sheep. The trend has been continuing post-hyperlink. How are we pulling off this miracle?

Assuming you agree that things like moon-landings and sheep-cloning are signs of collective intelligence rather than stupidity (if you want to question that premise, this conversation is moot), there are two possible answers

1.    “Technology” itself is getting smarter, in the sense of the Matrix. The anthill is progressively getting smarter, and we ants are getting dumber.
2.    Every technology empowers some people and disempowers others, and the whole system gets cumulatively smarter through these constant power shifts.

The sexy answer is 1), and it motivates a lot of science fiction.

The correct answer, of course, is 2), leverage, and I am not the first person to say so. Technology-as-lever is the premise of the classic work on the history of technological change, Joel Mokyr’s The Lever of Riches.

A simple example: My dad at 72 can still compute tips in his head faster than I can. But at 35, I’ve already “done” millions more calculations than he has, millions of times faster. That’s because I learned to program at age 14. That’s leverage. The pocket calculator freed us all from the burden of tedious arithmetic. Some of us learned to program. Others use the spare brain capacity to watch more celebrity news. It’s a choice.

This is the huge point that Carr fails to adequately analyze. The idea of technology as a lever that creates a choice; in the case of the Web, a choice between intentional and passive ways of engaging information.

Before and After Hyperlinks

Levers have two sides. An effort side and a load side. Autonomy, intention, authority and power go with the effort side. And since we haven’t yet invented true AI, there are always humans on that side.

Carr misses this point and proposes a one-size-fits-all picture of transformation. Before hyperlinks, we were all immersive deep readers. After hyperlinks, we’ve all become distracted, multi-tasking jugglers.

I am walking evidence that Carr is wrong (and remember you need just one counter-example to disprove a general point). I write a blog, where I am fairly generous with link-love, and am working on a book. I consume about 80 RSS feeds and rudely craft my own intentional narratives through them every day. I also read about 4-5 books every month. Some books I read deeply and passively. Others I read interrogatively and abandon as soon as a question is answered. Some I read in parallel with other books, others I read in isolation. The coherence of how I create and consume is driven by the coherence of my intentions.

So there is no either-or between Web-head/book-head modes of thinking. If I can balance this portfolio, so can others.

But Carr is right that there is a transformation going on. He just hasn’t followed his own reasoning through its logical conclusion by adding power and leverage to the analysis.

Getting on the power side of a lever takes some combination of knowledge, capital and luck.  When the barrier to entry is lower compared to the technology being displaced or marginalized, democratization occurs. Depending on which way the power shifts, you get either elitist or popular resistance.

In other words, there are two “Before” states and two “After” states whenever an old lever gets replaced by a new one.

Before, there were readers and writers. After, there are two new breeds: intentionalists and passives. Both of the “Before” states can migrate to either of the “After” states. There is a choice.

This explains why Jason Kottke is widely regarded as one of the finest bloggers around. He finds great raw material around the Web and reblogs it with a new intention: “intellectual stimulation and surprise.” Those operating by the book-lever mindset are shocked that he wields so much influence. In the old world, he’d be a “reader” on the powerless side of the lever.

Passive readers, used to their captivity and possibly attached to their captors (it’s called the Stockholm syndrome) can either choose to take control and learn the active reading arts, or retreat, grumbling, that they can’t make sense of the Web.

Writers can bemoan the “shallow” psychology of modern readers and watch their blogs and books gather dust, or they can reflect on their own sense of entitlement to attention, and take control of their unexamined default writerly intentions.

Let’s return to Carr’s basic “shallow” argument and see whether it withstands scrutiny with the lens of “intentionality.”

Which Way is Up?

Carr holds up the ability to be immersed in a single writer’s work as a sort of noble capacity. People capable of doing this, he argues, are in some way better. Well of course he does, you might say. People who sell lemonade argue that lemonade drinkers are nobler, smarter, and morally superior creatures.

But I don’t think Carr disingenuously ignored power and leverage questions and the collective intelligence/individual stupidity contradiction. I think he was led astray by the very word “shallow.”

Does this whole “shallow vs. deep” premise make any sort of sense? “Shallow” is not a neuro-scientific or psychological concept. The evidence Carr marshals from those disciplines is a gigantic red herring. Shallow vs. deep is a question about orientation metaphors, intentions and information.

What is “skimming,” anyway? The Web is directionless, so how do you orient it to call one direction metaphorically “deep” and another direction metaphorically “shallow?” Why is a click-path fundamentally a worse idea than a cover-to-cover read? If I present you with a click path through alternating good and bad reviews of the same movie across multiple websites, wouldn’t that deepen your understanding of the movie way more than a book-form compilation of Roger Ebert’s reviews of 2009 movies (an obviously “shallow” work)?

The same goes for the much-celebrated notion of “continuous partial attention.” If I skim a bunch of movie reviews, while letting the trailer play in the background and keeping a tweet-stream about it off to one side, am I paying complete and intentional attention to the question “Should I watch this movie?” Or partial attention to a bunch of whiny reviewers, each of whom wants to monopolize my attention and hijack my intentions concerning it?

How original, really, are most books? What proportion of a typical book comprises repackaged ideas that exist in better forms elsewhere? Why shouldn’t you choose to assemble an ad hoc exploration by trading some narrative coherence for some best-in-class expositions of component ideas? Who says every book deserves to be finished, anyway? As a writer, why not learn to offer a la carte content in addition to fixed menu options? Why not put as much creativity into your linking strategy as you do into your original narrative?

Deep and shallow have absolutely nothing to do with the medium or how “absorbed” the reader feels. They have everything to do with the governing intention behind the information consumption, and the depth and breadth of the actual information that accumulates. How that content is distributed across the chapters of a book, or across multiple websites, is basically irrelevant. The path created by the intention matters. The boundaries being crossed do not. Coherence is not “depth,” and dissonance is not “shallowness.”

Rao is an entrepreneur-in-residence in the Xerox Innovation Group and manager of the Trailmeme project. He blogs at ribbonfarm.com and is working on a book about metaphor and narrative in decision-making, tentatively titled Tempo.