Yahoo’s net income rose by more than 50 percent from the same period a year ago, but overall revenue fell short of analysts’ estimates.

Analysts had estimated on average that the company would pull in $1.16 billion in sales excluding revenue passed onto partner sites, Bloomberg reported. The company had sales of $1.13 billion instead. Its overall revenue rose 2 percent from the same period a year earlier.

The company pointed to a number of key initiatives like its deeper integration with Facebook, its acquisition of Southeast Asian social network Koprol and a new social games area with titles from Zynga. Asia is the company’s fastest-growing region, with revenues up 39 percent from the same quarter a year earlier. Europe and the Americas, by contrast, both fell.

Yahoo also pointed out that its search partnership with Microsoft would save the company $75 – 85 million a quarter going forward. Search advertising revenue, however, is also declining and fell by eight percent that quarter. 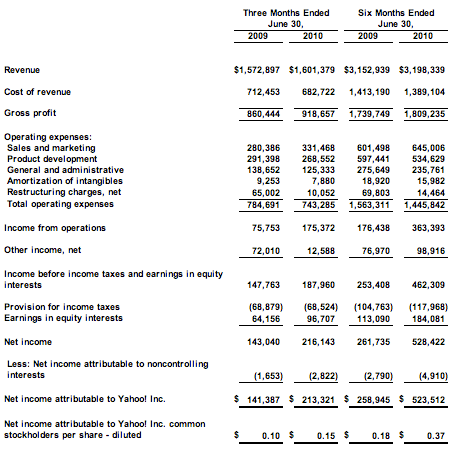