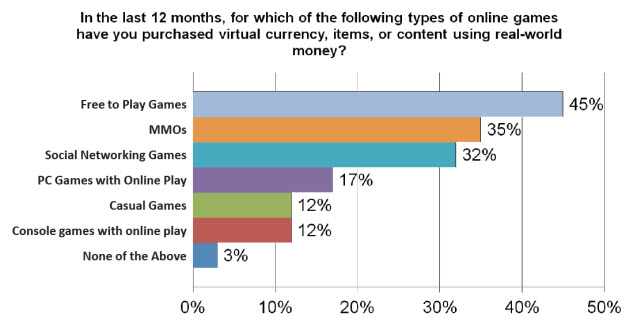 Three of out of every four online game fans have bought a virtual good using real money, according to a survey released today by virtual goods company PlaySpan and market researcher VGMarket. 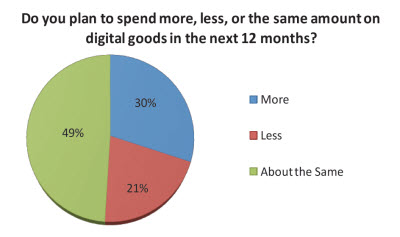 About 64 percent of users have made at least one purchase every month, while 9 percent say they have bought at least one virtual good every day, according to the 2010 Digital Goods Report. The report is based on a survey of 2,221 users between the ages of 13 and 64 across the PlaySpan Marketplace, Facebook, and Ultimate Game Card purchasers.

This group of users is certainly more inclined to buy virtual goods, but the data shows that virtual goods business models are catching on in the U.S., after first taking root in Asia.

PayPal was the most common method for paying for digital goods at 43 percent. About 32 percent of people paid with credit cards and 30 percent paid with PlaySpan’s Ultimate Game Card. Facebook Credits, still in its infancy, accounted for 7 percent of purchases.

While males are playing significantly more games and are the primary drivers of total virtual goods sales, North American women 25 and older are spending disproportionately large sums of money on virtual goods. On social networks, the average female spent $55, compared to only $30 for males. Females also spent twice as much, $50, compared to $25 for males when buying in-game currency. Here’s a link to data from past surveys. 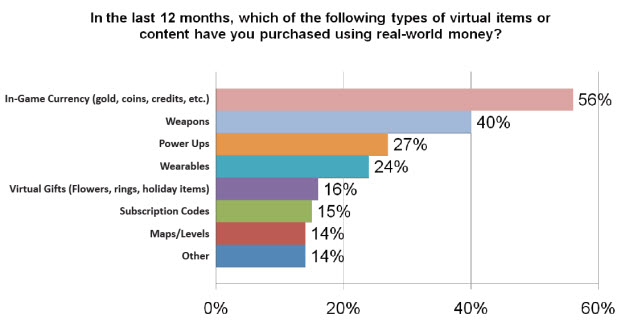