URL-shortening service Bit.ly is racing to remain competitive since it stopped being the default for Twitter in April and with the proliferation of new, particularly branded link shorteners like amzn.com for Amazon and Cokeurl.com for Coca-Cola. To sharpen its edge, Bit.ly just updated its real-time analytics dashboard for its enterprise customers.

The new tools will allow web publishers to keep better tabs on where their links are popping up all over the web, giving them more insight into which posts are getting the most attention. With social media strategies becoming more important that ever, these tracking capabilities should help Bit.ly remain one of the top companies of its kind. 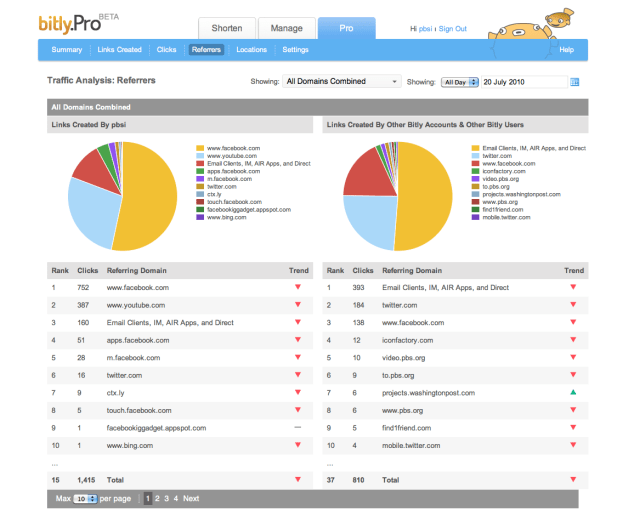 In addition to seeing where and how frequently their links are being shared, these publishers will also be able to view exactly how many times people have clicked on them. For example, they will be able to determine whether the bulk of page views for one story came from Facebook, or Twitter and even which Twitter accounts. The idea is to arm them with as much data as they need to optimize their social media marketing plans.

Bit.ly’s enterprise services are offered only to high-traffic web sites and cost $995 a month.

To give you a sense of how competitive the URL shortening business is becoming, today also marked an announcement from rival service OneCent.US — a “patriotic” shortener that doesn’t depend on foreign domains like many others do — that it is also launching tracking and analytics services, promising to serve up all, unfiltered data.

“URL Shortener kingpin Bit.ly’s online tracking and analytics is great,” OneCent.US owner Bill Purkins said in a statement. “It’s nice and fluffy like cotton candy. It’s purdy, it’s tasty and it’s fun to use, but for serious marketing analysis, I at least would want the raw data.”

Bit.ly, based in New York,  last raised funding in February, bringing in $1.5 million, and bringing its total capital raised to $3.5 million.