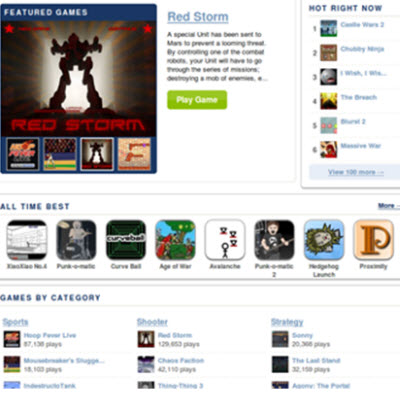 Heyzap is launching a way to simplify that non-game companies can add games to their web sites with Heyzap Arcade.

The San Francisco company, which indexes Flash games on the web and helps developers make money from them, will provide the equivalent of a games portal in a box. Heyzap Arcade is already integrated with social network platform Ning. Heyzap Arcade is a tool that allows any site to add one line of code to instantly add as many as 30,000 games to a web site.

As traditional TV declines and online game audiences grow, many brands with web sites are eager to add the games to their sites to make them more sticky, or retain users for a longer period of time. Visitors to sites will also often return and become more active if they can engage with games on a web site. Heyzap can thus allow sites to make more money by getting more high-quality traffic and by selling virtual goods inside the games through micro-transactions.

Heyzap has a network 250,000 web sites already using its game widgets. Heyzap’s vision is to become a social platform for games that makes them more accessible to broader audiences. The company raised $3 million in June from Union Square Ventures and the Founder Collective. It also raised funding from Y Cominator and angels Naval Ravikant and Joshua Schachter.