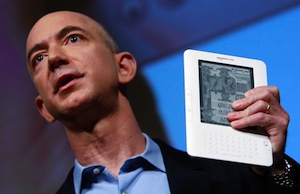 Amazon.com released a disappointing earnings report today — revenue and profit climbed, but not as much as analysts expected. As a result, the company’s stock has fallen sharply in after-hours trading, dropping more than 11 percent as of 4:40pm Pacific Time.

The company said it brought in $6.57 billion in net sales, up 41 percent compared to the second quarter of 2009. Net income increased 45 percent year-over-year, to $207 million and 45 cents per share. Analysts, however, had predicted Amazon would earn 54 cents per share. Falling international currencies and Amazon’s decision to cut the price on its Kindle e-book reader as it faces competition from Apple’s new iPad are two likely culprits for the disappointment, according to Bloomberg.

Still, Amazon is highlighting the positive numbers about the Kindle, namely the fact that it’s now selling more Kindle books than hardcover books and that it sold three times as many Kindle books in the first six months of this year as it did during the first six months of 2009. In the earnings report, chief executive Jeff Bezos (pictured) also noted that in the last year, customers have ordered more than $1 billion worth of products on Amazon from a mobile device.