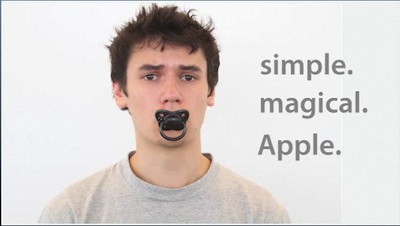 Apple attempted to address the iPhone 4’s reported antenna problems at a press conference last week, where it promised to give a free rubber case to every iPhone 4 owner in order to improve reception. But it looks like the controversy isn’t going away.

For one thing, competing phone makers have criticized Apple chief executive Steve Jobs’ claim that other smartphones have similar antenna problems. And popular satire site CollegeHumor (owned by Internet conglomerate IAC) just released a video (embedded below) with its own take on the situation. The video is tongue-in-cheek, of course, but it restates criticism that others have leveled at Apple; namely that the company thinks it knows what’s best for customers and isn’t taking complaints seriously.

So if the criticism continues, is that a serious problem for Apple? Not necessarily. Even if customers are grumbling, they’re still buying iPhone 4s as fast as Apple can make them, as Chief Operating Officer Tim Cook pointed out earlier this week. Or as CollegeHumor’s Steve Jobs stand-in put it:

Feel that Apple has been neglectful, even arrogant throughout this entire process? Fine. Come into any Apple store and we’ll swap it for any competing smartphone. Nobody? You mean, nobody wants this elegant Palm Treo? Didn’t think so.