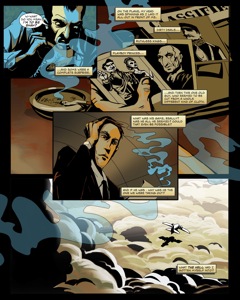 It has been a big year for digital comics, with publishers like DC and Marvel jumping onto the iPad and other devices. Still, most of the news involves transferring existing comics to new devices. Now, two San Francisco startups, Cognito Comics and gaming company Tall Chair, are creating an experience designed specifically for the iPad.

Cognito Executive Producer Daniel Burwen gave me a demonstration of the first few pages of his graphic novel Operation Ajax, which is an adaptation of Stephen Kinzer’s nonfiction book All the Shah’s Men: An American Coup and the Roots of Middle East Terror. Animated transitions give the comic a cinematic feel, and also give the artist more control over how the page unfolds. The format provides an opportunity to make supplementary material such as photos and documents available within the relevant comics panel.

It’s different from anything I’ve seen in digital comics. Technologies like ComiXology’s “guided view” create a smooth experience by moving the reader from panel to panel, but you’re still reading your basic, old-fashioned comics page. (Comics critic Douglas Wolk wrote a persuasive essay about why the transition from printed page to iPad or iPhone can be a bit awkward.) Another startup is Graphic.ly, which has built its own reader for tablets and includes social features. Meanwhile, Marvel has also created “motion comics,” which use comics art as the foundation for an animated movie.

Operation Ajax lies somewhere in between, where you still feel like you’re reading rather than watching a movie — instead of being forced along at a movie’s pace, you can stare at a page or panel for as long as you like — but with content that you couldn’t include in print. And it has the benefit of being drawn for the iPad screen, which is smaller than most comic pages, so there’s no struggle to make the art fit.

The graphic novel is the launch project for a comics creation and reading technology developed by Tall Chair, called Active Reader. Again, the idea is to create comics specifically for the iPad, rather than to optimize existing material for the device. (Although at the end the process, artists should have pages that they can turn into a printed book as well.) Chief executive Dan Brazelton said it’s hard to compare the process of creating an Active Reader graphic novel with a print graphic novel, but he estimated that the interactive iPad version probably takes about 20 percent more work than normal.

On Operation Ajax, that work is being done by Burwen and Art Director Mike De Seve. They wrote the script together in consultation with Kinzer, De Seve is creating most of the initial art, then Burwen is translating that art into an animated iPad page. Brazelton said that some comics artists will be able to handle the iPad-ization on their own, while others will want to bring on an additional team member — he compared it to traditional comics creation, where some people are good at writing and drawing, while other form a team with a writer and an artist (and an inker and a colorist and a letterer).

The companies plan to release Operation Ajax and Active Reader sometime this fall. The book will be released in chunks, with a free preview followed by eight chapters costing about $1.99 each. That means the finished product should cost about as much as a print graphic novel.

Outside comics, Tall Chair has also created mobile games like Cowboys vs. Zombies and Warner Bros.’ Sherlock Holmes Mysteries. It has raised angel funding from the Venture Development Group and Jung Soo Kang.