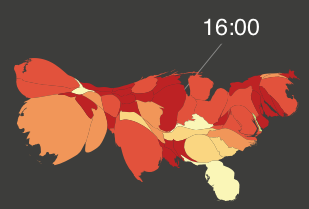 If you go by tweets, Americans are happiest in the early mornings and then gradually become more negative as the work day progresses, according to researchers at Northwestern and Harvard universities.

A team of five researchers at the two schools studied 300 million U.S. tweets from September 2006 to August 2009 and performed sentiment analysis on them. They found that the evenings (presumably when people get off work and are socializing with friends) and early mornings (before work) are the happiest times of the day. You can see in the map to the right that around 4 p.m., the map becomes bright red, indicating negative emotions. The trend is distinct on both the East and West Coasts.

Furthermore, happier sentiment creeps back up on weekends after a trough on Thursday evenings.

The researchers created the visualization of mood changes throughout a day below using density maps. Larger areas on the map reflect a greater number of tweets at that time. Green colors are more positive, while reds are more negative. (You can tell that California never gets quite as unhappy as the East Coast, too.)

The project is one of many ongoing studies into status updates and sentiment analysis. Facebook has its own in-house team led by a research scientist named Cameron Marlow. The social network tracks a metric called “Gross National Happiness,” inspired by the idea originally coined by the Bhutanese government in the early 1970s. There are constantly updated graphs on Gross National Happiness here for the U.S. and a number of other Westernized countries where you can see similar troughs and peaks in sentiment around weekends and workdays.