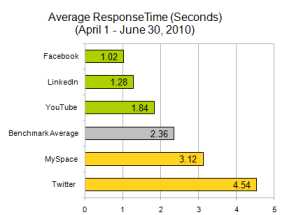 Under stress from heavy World Cup traffic, Twitter fell to the bottom of the rankings that compare site load times and reliability for social networks, according to AlertSite today.

“Performance dropped significantly compared to Q1,” the company said. “The time it took the website to load nearly doubled, and availability slipped nearly half a percent.”

The company, which offers products to keep web services at peak performance, tracked the response times of five social networks and services, inlcuding YouTube, LinkedIn, MySpace and Facebook for 90 days.

Twitter took more than four times as long to load as Facebook, at 4.54 seconds compared to 1.02 seconds. LinkedIn was a close second behind Facebook with an average response time of 1.28 seconds. AlertSite said MySpace improved dramatically because it was accessible 99.98 percent of the time.

Twitter has had a difficult month; the World Cup broke its records for tweets published per second. At the same time, the company’s engineering team has been making changes to Twitter’s technical infrastructure. The company said it made more than 50 improvements during the games to raise its network capacity.