Mass Effect was Bioware's second attempt at a riveting space opera RPG, KOTOR being the first. It was a fantastic adventure, though not without it's own growing pains. On the second try, Bioware has outdone themselves by taking what the community said into consideration when refining the sequel. In doing so, Bioware has created in my opinion, the most accessible RPG of our generation. I say this with confidence, having played a large collection of both western and eastern RPGs. 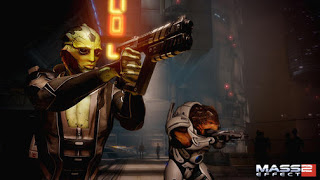 The most immediate thing many veteran RPG players will notice is the lack of any formal inventory or loot mechanic. Instead, your characters inventory is managed in 3 ways: weapons – in which gaining a single weapon type makes that available to all characters who have the option of using the specified weapon type, armor – which only applies to your Avatar and is limited to only a few variations, piece mealed out to you, and upgrades – which increase all the different weapons, armor, and ship components using minerals. Everything else found in game when picked up is instantly converted into money. Some resource cashes can be found in various missions, but for the majority of upgrades, the user must engage in planet mining. The whole concept is genious, because of how easy it is for anyone to play.
Also, this lends itself very well to the combat element, because the missions are much more linear and less plagued with long walks to various destinations and mid mission diversions.
﻿Combat has been streamlined, cover is much easier to use, powers are more accessible since they can be mapped to various buttons and where you shoot your opponent will affect the level of damage they receive. That's right, no more dice rolls, instead, heads and limbs will explode if shot correctly. Also, enemies seem much more differentiated from each other, so a vanguard is clearly different from an engineer and so on. When you get to the end of a mission, all your accomplishments are listed and all XP is tabulated based on the decisions you made. Like the previous installments, role playing conversations and making decisions is the central component, where the combat mechanic (though much improved) is secondary. There are numerous instances in conversation where some characters are down right hilarious and others where the cinematography of a conversation is borderline "movie like" quality. 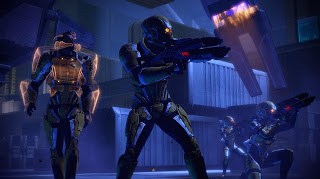 Your crew comprises the majority of these events, either during recruitment or loyalty missions, but some side conversations will also intrigue the user. Again, each character in your party has a recruitment & loyalty mission, combined with a couple story driven missions, this puts the main story component at about 20 – 30 missions, each of varying length. Other cities, anomaly's and e-mails will provide the rest of the secondary assignments, probably equal to another 100 side missions or so. Anomaly's in particular are a cool feature, relating to the mining resources mini game we discussed earlier. When mining, occasionally a probe will find more than resources and allow you to land on a planet. These missions are typically 10 minutes blurbs that daisy-chain into 3 or 4 more side missions and are a welcome departure from the monotony of mining. On to your alignment, where the choice of good or evil is not a black and white affair as it is in some games. Though, through your various missions and conversations, not only are you able to provide good/evil responses, but you can now interrupt with a good/evil action. I chose evil for my character and one of my favorite interruptions involved a Blue Suns Mercenary, a plate glass window and the top floor of an Asari skyscraper. You get the idea. The games ability to immerse you in the role of a specific character and develop your own story is what make this a true role playing game.