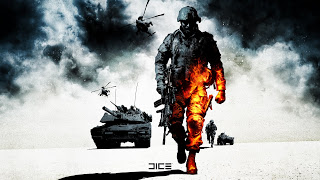 The boys of bad company are back, and they are ‘in it to win it’ in this high octane sequel from DICE. Battlefield: Bad Company 2 comes from a long line of first person shooters. Like its predecessor, it changes the Battlefield formula by creating a story with memorable characters. Having not played the first Battlefield (shame on me), I was not familiar with the returning cast members. Perhaps this was a good thing, because it has become my favorite FPS and expectations did not get in the way of that. Haggard, Sweetwater, Sergeant Redford, join you (Marlowe) on a crazy adventure around the world, trying to keep the impending Russian threat at bay. Many reviews promoted the impression that Bad Company’s latest incarnation lacked the same depth in the character development and story as its predecessor. I, on the other hand, enjoyed the story and down time between fights. The squad’s camaraderie led to conversations on topics ranging from the best scenes in the movie Predator, to names common in the continent of Africa. After a long stint of playing more serious FPS’ like Modern Warfare 2 and Bioshock 2, it was refreshing to see my squad having as much fun as I was. 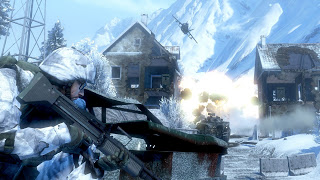 Speaking of fun, the other great thing about this Battlefield, much like Battlefield 1943, DICE’s implementation of the Frostbite engine makes for some “explosive” situations. Frostbite is a development engine that makes much of the environment in Bad Company 2 fully destructible. Sure, it has its limitations, since buildings require key points to be destroyed before they topple. Not everything in the environment is an object, and those are not destructible in a real world sense. But when a sniper has you pinned down from a tower and he is perched up there just right, I would typically opt to destroy the whole tower. The combat scenarios built around this destructibility favor the game, allowing the user to commandeer jeeps, tanks and various drones to level whole villages. As usual, the Battlefield vehicles are fun to drive and are typically responsive, save for a little collision detection hiccup. Jumping in a tank and blasting out the sides of buildings is a romp, doing justice to how beautiful the engine was designed.

Weapons are another high point in Bad Company 2, for more reasons than one. Variety is the key component; since many weapons have been featured in other FPS’, and we all have our old standbys. How many times in a level have you really needed a sniper rifle, but couldn’t bear to part with the shotgun? You would be SOL. In Bad Company; however, story checkpoints are populated with supply drops pretty regularly, which allow you to cycle through all the weapons you have currently collected. That is the second part that is genius about this game, a well-developed collecting system. Most FPS’ have very little collecting elements outside of some weird story driven object, say audiophiles or laptops. With Bad Company 2, there are over 40 guns to collect in the story mode. Doing so not only earns you an achievement, but opens up a number of ways to kill your opponents. There are also a set of secondary mission objects which involves you destroying communication relays. 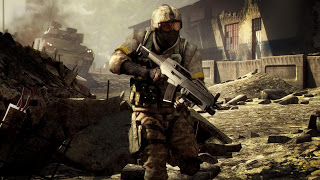 Multiplayer; this is where people’s opinions of the game begin to split. With so many FPS’ out there offering some form of multiplayer, why would Battlefield 2 stand out? I feel it is a matter of taste. Modern Warfare 2 is the game to beat this year, obviously. Although Modern Warfare 2 is a better shooter from a technical aspect (in my opinion), it lacks the variety Battlefield has created. First off, Battlefield is class based and you level within each class, unlocking new abilities and weapons which are unique to those classes. Combined with diverse maps, vehicles, and all the destructible environments, I personally think the multiplayer can be more fun and less frustrating. Sure Call of Duty fans would disagree, and that’s why it’s a matter of taste. For me, it is the best FPS on the console right now, but we will have to see what Halo Reach holds.