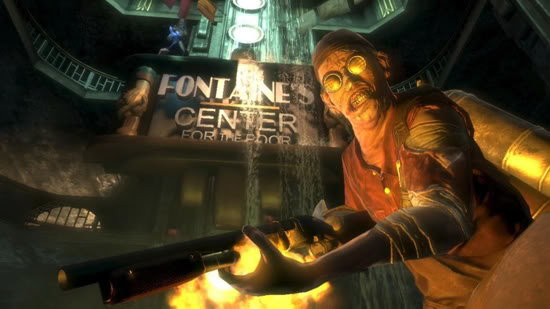 Saying the Xbox 360's first-person shooter library is crowded is an understatement. Halo, Call of Duty, Left 4 Dead — the list of blockbuster shooter franchises on the console is staggering.

This fierce competition, however, only makes Bioshock's excellence all the more impressive. With its addictive gameplay, tense atmosphere, and engaging story, Bioshock cements its place as the best shooter — and, arguably, the best game, period — in the Xbox 360's library.

The game's creepy atmosphere is its most immediate quality. The world of Rapture is a dark, decrepit, and, oddly, beautiful all at once. Blood smeared on the walls and floors, furniture strewn about like tornado debris, mutilated corpses hanging from ceilings — the environments are utterly horrifying.

Tension further accentuates the horror. There's no such thing as a "cleared" room in Bioshock. Once safe areas are frequently reinhabitated by enemy splicers, rummaging through trash heaps, eerily singing or whistling all the while. The player never knows what's around the corner, creating a palpable feeling of paranoia and uncertainty.

But splicers are mere cannon-fodder compared to Bioshock's most terrifying enemies: Big Daddies. I can't remember how many times I've sauntered into a room, ammo and health plentiful, feeling generally secure (well, as secure as one can feel in Rapture), only to have my sense of security shattered into a million pieces by the whale-like moan of a nearby Big Daddy. 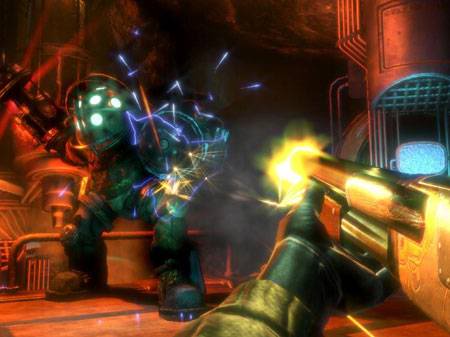 "Oh, boy," I say. "I think I'm gonna need a bigger gun." No video game enemy has ever evoked a feeling of dread in me like those hulking behemoths.

Bioshock's philosophy-laden story helps separate it from the pack. In an industry dominated by hackneyed, second-rate action movie plots, Bioshock's lurid tale of the downfall of Andrew Ryan's underwater utopia, Rapture, is refreshing. Developer Irrational Games imbued their game with Objectivist themes, inspired by the writings of Ayn Rand (particularly Atlas Shrugged). Whether one agrees or disagrees with Irrational's commentary on Rand's philosophy, one can't help but admire their ambition to elevate their game's story beyond conventional gaming tropes.

Bioshock forgoes cinematic cutscenes, instead letting the story unfold mostly through audio diaries found littered throughout the environment. Listening to former Rapture residents recount the collapse of their once-thriving society is disquieting. It immerses the player in the story in a way cutscenes can only aspire. Important events unfold right before the player's eyes, fully playable.

What's that? A video game that embraces the medium's unique qualities and doesn't try to be a big-budget Hollywood thrill ride? What a concept!

But atmosphere and story aren't worth much without fun gameplay, and Bioshock delivers on this front in spades. Admittedly, the shooting mechanics, while solid, are definitely flawed (Modern Warfare this is not).

No, what really makes it's gameplay special is the conservative injection of RPG elements. Hacking too tough for you? Buy an engineering tonic. Shotgun not powerful enough? Upgrade it. The ability to augment weapons and purchase physical enhancements gives the player a sense of ownership seldom found in shooters.

Another factor that distinguishes Bioshock from most shooter's is its lack of multiplayer. Some may view this as a detriment, but Rapture is best experienced alone. (The sequel's flaccid online play is evidence of such.)

Not every first-person shooter can be (or should be) an online fragathon like Call of Duty. I applaud the folks at Irrational for recognizing their game's strengths and sticking to them. 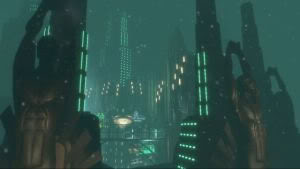 For me, Bioshock is the full package. Sure, it isn't revolutionary (hell, Half-Life wrote the book on first-person narrative nearly a decade before Bioshock). But the way it blends all of its elements together in such a unique setting pushes it to the front of the pack.