With the latest generation of video game consoles reaching full stride, popular culture has created a menagerie of different gamers. This results in more mainstream ad campaigns for video games, and the opportunity for creativity. Bizarre Creations’ newest IP, “Blur”, is an arcade racer, heavy on vehicular combat and multiplayer. The latest ad campaign features a foodstuff named “Brock Lee”, who is tired of driving in kart races for babies and marvels at the “big boy” racing in Blur. It is all very tongue-in-cheek and clearly a shot at the traditional kart racing genre and its current leader, Mario Kart Wii. Despite any qualms you have with the “sharing” of ideas across IPs, I feel the marketing is effective and succinctly explains the games overall theme. After seeing this, a post appeared on Kotaku showing the French ad campaign behind Blur. The approach towards the ad campaign is significantly different, taking the more “traditional” approach to advertising a product. Let's look at the two ads after the jump and go from there:

I wanted to understand why Activision/Blizzard would toss a creative commercial based on the old tenants that sex sells anything. It made me want to further explore cross-cultural advertising in video games and understand whether or not a character like Brock Lee would have found success in France.

A Point of Reference

Something important to American marketing campaigns is a historical point of reference that many new demographics in gaming may not have. It indirectly tugs on the heartstrings of nostalgia and reminds us of what many kart racers are at their core: arcade racers with super deformed characters and light combat. If you had not played a kart racer or never heard of one, then the commercial would seem confusing and insignificant. Therefore, I did my best to pull some statistics on the Mario Kart Wii as it related the U.S. and France. From here, we can draw a few inferences: 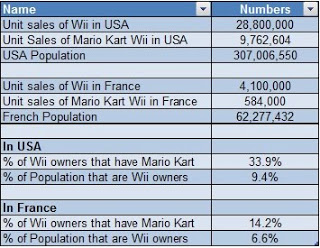 The first point is that the number of Wii owners in the USA is statistically higher than in France, when compared against the population. Therefore, the number of people who are aware of a game like Mario Kart Wii is much higher in the U.S. Secondly, this trend continues with how many Wii owners actually purchased Mario Kart Wii in their respective regions, about 1 in 3 for America and 1 in 7 for France. These are all estimations, since we cannot account for how many people may have purchased two copies or how many people may have borrowed a copy from a friend, etc. I think it paints a clearer picture of why France may have chosen a more “traditional” ad campaign.

Another Activision/Blizzard Game Tried It

Many games today release worldwide to various cultures, of which the European region is one of the most diverse. If an international publisher develops an ad campaign for a specific game, financially speaking, it is more cost effective to use the same campaign across multiple regions. Sure the commercial may need some slight cultural adjustments (language being the most important), but the overall vision remains the same. Take for example the WOW ad campaign featuring celebrities as characters in the MMO. Stylistically, both France and the U.S. shared the same ad campaign, as you can see below, with slight adjustments to the actors and language people could identify with. Ironically, Americans all know who Jean Claude Van Damme is, and vice-versa for William Shatner, but the important point is the marketing message of the commercials are the same. I would suppose that celebrity power enhances the message, since demographics can immediately identify with a person they are familiar with, but I do not believe that is the only way to bridge that gap. Maybe that was what was missing, since Brock Lee was a parody of the common kart-racing protagonist.

A Campaign which Strikes the Same Chord

There is another ad campaign, which tries to appeal to the same gamer nostalgia as the Blur campaign. Gamestop’s recent parody of familiar video game tropes has been a successful ad campaign in the U.S. over the past year. My personal favorite was their first, with the bunny protagonist stumbling upon a treasure trove of coins and exclaiming “Holy Shit!” It captures a feeling any gamer has had at one time or another in the most simplest of ways. This continued with other iterations showing examples; like the variety of obstacles one may experience trying to get a single coin or the simplicity of beating a boss, if you have the right weapon. Say what you want about Gamestop’s effect on the industry on a whole, but this advertising is smart and it appears to be working. In 2009, gross profit increased by $164 million or about 7%. Sales also increased at about 3% and COGS only increased at about 1.6%, explaining the increase in profit. There are a number of factors influencing an increase like this, but since the campaign has now influenced buyer behavior for 18 months. As GameStop intends on taking over the retail used game business worldwide, they have recently purchased MicroMania, the leading retailer in France. I do not speak French so I have no idea what this MicroMania Commercial is trying to say, but I wonder if Gamestop would be willing to bring the bunny campaign overseas in the future.

What did we learn today? Cross-cultural ad campaigns are difficult to implement, because no two cultures are the same. Some commercials can be tweaked, others are completely different, but if you cannot come up with a creative commercial, just show some skin. That will move units just about anywhere. Still, I bet Brock Lee could be popular anywhere.

Google Image Search for the pictures