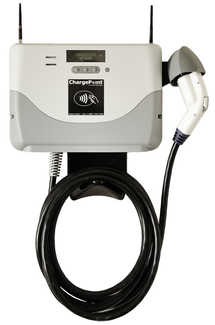 Coulomb Technologies, one of the most successful companies rolling out rapid roadside charging stations for the new generation of plug-in vehicles debuting this year, announced today that it has adapted its technology for use in the home.

Interestingly, residential chargers are where many of Coulomb’s competitors have started out — just look at General Electric’s recent launch of its WattStation charger, capable of juicing up a battery in four to six hours. It looks like Coulomb wants to be able to claim market share on all tiers of this emerging market.

Coulomb’s residential chargers, dubbed (somewhat inelegantly) the CT500 Level II ChargePoint Networked Charging Stations (one pictured above), are smaller than their roadside peers and have an output capacity of 7.2 kilowatts. They’re appropriate for what Coulomb is calling “light commercial use” as well, which probably means stations for fleet vehicles.

Homeowners can buy the new ChargePoint stations via any of the company’s existing regional distribution channels, like Clean Fuel Connection in California, Charge Northwest in the Pacific Northwest and NovaCharge in the south.

The chargers are unique from similar systems on the market because they are networked together. This open platform allows for applications that can facilitate billing, energy management, authentication and demand response services. The idea is to make fueling up batteries as easy as possible by giving customers the information they need.

Coulomb’s growth strategy so far has been to roll out charging stations to one city or region at a time. It just unveiled its networked stations in New York two weeks ago. And at the start of July, it won $3.4 million from the California Energy Commission to install electric vehicle infrastructure throughout the state.

Coulomb’s venture-backed competitor, Better Place, has shifted its focus to battery-switching stations where plug-in car drivers can swap out depleted batteries for full ones. But neither this concept, nor its charging stations have gained much traction.