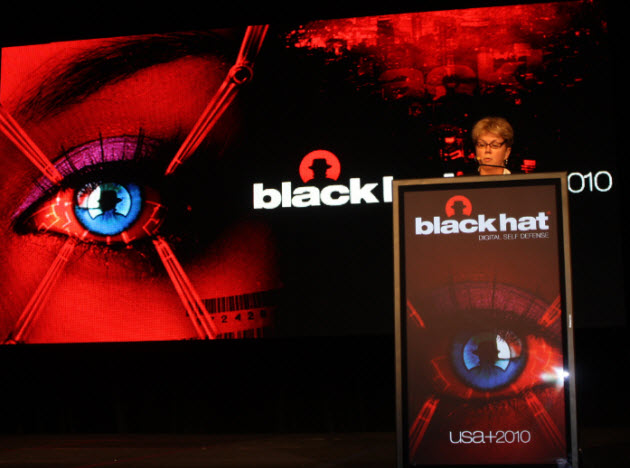 The Department of Homeland Security is well aware of the vulnerabilities of cyberspace and has made taming the Wild Wild West of the internet a high priority.

Jane Holl Lute, deputy director of Homeland Security, said in a keynote speech at the Black Hat security conference in Las Vegas today that it isn’t right to accept as inevitable that cyberspace will be a war zone for the foreseeable future, an ungovernable place where users have to beware what they do. 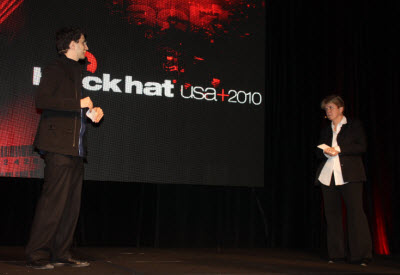 In introducing Holl Lute, Jeff Moss (pictured, left), organizer of the Black Hat conference and a one-time hacker known as Dark Tangent, said that nothing we do online is secure. After billions spent on security and tons of products from security vendors, we still can’t browse the web, shop, write emails, or explore the web in a secure manner. Yet the world depends on the internet as the engine for innovation and commerce. (See our roundup of all Black Hat and Defcon stories).

Holl Lute said the Department of Homeland Security’s mission is five-fold: prevent a terrorist attack, secure our borders, enforce our immigration laws, ensure the safety and security of cyberspace, and build a resilient and safe society able to deal with unanticipated hazards. The mission for cyberspace isn’t just to defend against attacks, but to enable innovation and commerce. The very fact that cyberspace is included in the department’s top five missions shows that the current presidential administration cares about the problems at a high level, she said.

“We have expectations of transparency, inclusivity and reciprocity,” she said. “We need to part from the romantic notion of cyberspace as the Wild Wild West or a combat zone. We must have rules.”

To keep everyone from coming into conflict, the government must create a better environment, with firebreaks and space for everyone. If you’re wondering where the specifics are, there weren’t that many. But Holl Lute said the government is protecting its own agencies through a program known as Einstein 2 and is deploying a stronger cyber defense initiative in the fall.

One of the problems is that laws haven’t kept up with the rapid changes in technology. “Laws anticipate the familiar,” Holl Lute said. “It takes time.”

In the meantime, Holl Lute called on the security researchers attending the show to help in the effort. She referred to them as the “ablest generation,” more connected and gadget aware than any prior generation.

“I’m a person that believes this country can protect itself,” Holl Lute said, asked if a security catastrophe is inevitable. “What will we make possible, in order to deal with what we don’t know.”