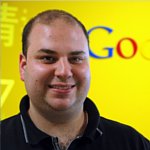 Another day, another Android departure.

Google’s worldwide head of Android business development and operations, Tom Moss, has left the company this month. He owned relationships with the major handset manufacturers and carriers for Google and led business development for the Android operating system. He was also a recipient of a Founders Award, which are generous Google stock grants that can be worth hundreds of thousands or millions of dollars and are used to protect employees from poaching.

We’ve reached out to Google for official confirmation.

Moss follows other key Android managers in leaving the company including Erick Tseng, who went to Facebook, Sung-Hu Kim, who went to Twitter, and Gummi Hafsteinsson, who landed at Apple after it acquired Siri.

Losing key people left and right might put a dent in Google chief executive Eric Schmidt’s plans to make $10 billion a year from mobile devices. Mobile is an incredibly competitive space for recruiting and keeping talent and there are plenty of opportunities to build startups for managers and engineers with a few years of experience working on Android under their belts.

We don’t know where Moss will head next, but we’re suspecting it might be a company of his own creation.