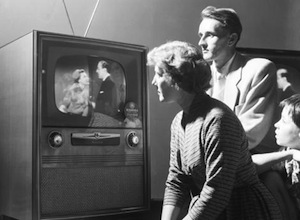 It looks like investors hope to take the “check-in” model popularized by Foursquare to TV viewers. A startup called Philo, which lets users share which shows they’re watching, just raised its first round of funding.

We’ve covered similar companies before, most notably Miso, which has been described as “Foursquare for TV,” and which has been backed by Google Ventures and others. (Miso investor Georges Harik also invested in VentureBeat.) TV check-ins are also part of Hot Potato, an app that lets users check-in to events and activities, and which is reportedly in acquisition talks with Facebook; as well as GetGlue, an app whose users check-in to their favorite media and content. 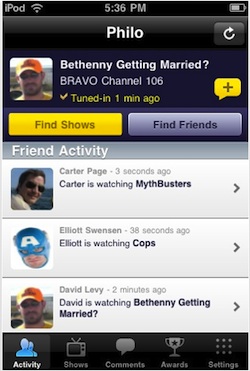 Philo cofounder and chief executive David Levy said the New York company is distinguished by its “hyper-focus” on TV. As suggested by the list above, most competitors include TV as part of a broader range of potential check-ins. Even Miso covers both TV and movies. Levy said he wants to drive as many users as possible to both watch a show and interact socially around it.

“The viewing party is now virtual,” he said.

Features include the ability to see who else is tuning in, to receive awards for checking in to shows, and to participate in virtual scavenger hunts. Philo is also launching its Web app and a new version of its iPhone and iPod Touch apps today. The new versions add support for time-shifted check-ins (so you can still check-in if you’ve recorded a show and are watching it later) and push notifications (so you can find out right away when your friends start watching a show). Apps for other mobile platforms like Android are in development, Levy said.