[Update: Google said its machines may have overestimated blockage to its services and that users are accessing search normally in the country.]

A public site where Google has been documenting daily access to all of its services showed that for the first time, web search is “fully blocked” or unavailable 67 to 100 percent of the time.

It’s not clear whether the service is being actively blocked or if there is something else interfering with access.

Google and the Chinese government have been locked in a tense battle since December of last year, when the company said hackers broke into its data and targeted human rights activists. Without directly pointing the finger at the Chinese government, Google said it would henceforth not censor its web search results — something it had been doing for four years to appease government officials.

Google now sends Chinese users to a landing page, where they can click to search on a Hong Kong-based version of the site, which is uncensored. 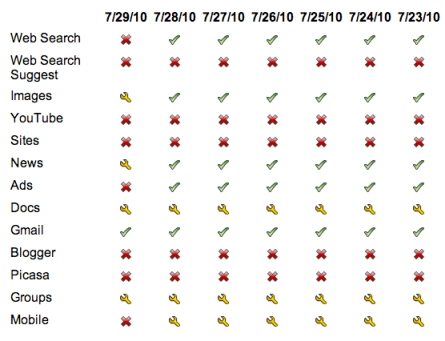