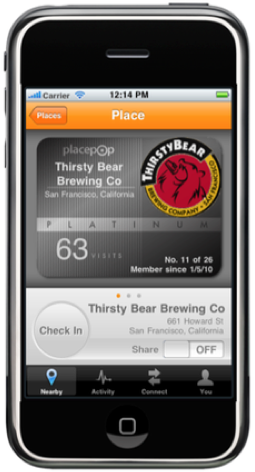 PlacePop,  a company that allows any company to create and maintain virtual loyalty cards, launched its iPhone app today. It also announced fresh funding of $1.4 million from a number of angel investors.

PlacePop wants to replace the clumsy, physical loyalty program cards people carry around in their wallets or forget in their desk drawers. So it’s joining  a lot of companies doing the same thing — helping people go virtual with their loyalty cards. It’s not clear whether PlacePop really can differentiate itself in such a crowded market.

The San Francisco company, led by former Friendster CEO Kent Lindstrom, today began offering cards that can be accessed with smartphones — and you can do this from shop or a restaurant while “checking in” at that location. In an effort to differentiate itself, PlacePop says it is giving businesses a lot of control over their campaigns, allowing them to customize the branding and look of their virtual card as well as its functionality.

I spoke with Lindstrom, and he said the funding could last for a year, depending on how things go. The company’s full platform will launch in beta within the next two weeks, he said, and the company is working on an Android app to follow the iPhone launch.

Lindstrom said the company is “really focused on making sure [they] have the tool right for small businesses”, and, building on that, PlacePop will be targeting big brands and retailers. Lindstrom said that the company has already been picking up interest from the big retailers and restaurant chains.