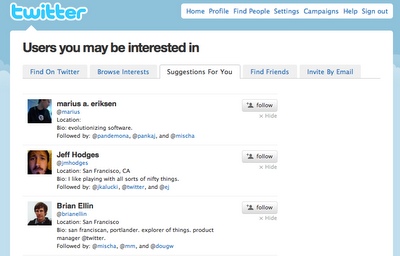 Twitter is starting to give personalized recommendations for people to follow, as it pushes to increase retention of new users.

It’s like a “PeopleRank” of sorts — a social play on Google’s original PageRank algorithm, but with humans at the center instead of web pages. Many startups and even larger companies are building variations of this for their consumer-facing products or to serve as a backbone for other services.

Two companies, Klout and PeerIndex, are building directories of experts and reports on how adept or influential people are based on social media. Another company, PeerPong, leverages Twitter and Facebook connections to figure out who to refer questions to in its Q-and-A system. Many real-time search engines, including Google’s, keep track of relationships between users to inform the relevance of their results, too.