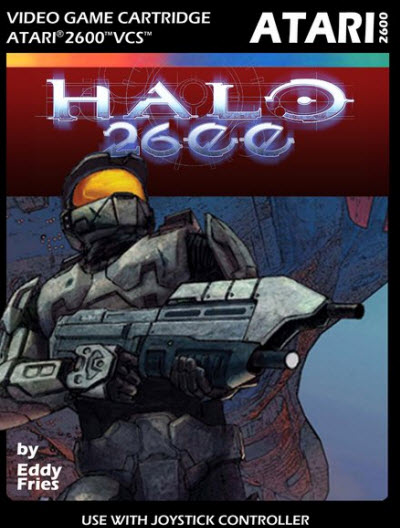 Everybody knows Halo as the blockbuster video game franchise that debuted on the original Xbox in 2001. It has gone on to sell more than 30 million copies. But now Halo is coming to — of all platforms — the Atari 2600. It debuted this weekend at the Classic Game Expo in Las Vegas.

The game is called Halo 2600. Yes, that’s the pioneering video game console that debuted in 1977 and kicked off the home video game revolution. There’s actually a thriving hobbyist industry of classic video game fans who travel around to shows and play nothing but the old games from the beginning of the industry.

The new Halo game was created by Ed Fries, the former head of Microsoft Game Studios who left the company back in 2004. He has since consulted with a number of video game companies and is chief executive of Figure Prints, which makes World of Warcraft figurines based on characters created by fans.

Fries told me he took on the project as something he wanted to do for fun. Fries got his start in video games by creating a Frogger clone game (under the name Eddy Fries) for the Atari 800 may years ago. He went on to join Microsoft, worked on Excel, and rose through the ranks in the Office group. Then he became head of Microsoft Game Studios and built the division. By the time he left in 2004, his teams had created 18 games that sold more than 1 million units. One of those games was Halo.

This game is a “re-imagining” of what Halo would have looked like if it were released on the Atari 2600. You play Master Chief, the hero of the series, and battle your way through 64 screens. You locate weapons and find power-ups to help you beat increasingly tough enemies.

Fries got the idea to work on an Atari game after he spoke at a video game conference in Philadelphia. Someone suggested he read “Racing the Beam,” about programming the Atari 2600. Fries hadn’t written anything in 6502 assembly code in 30 years. But he picked it up quickly and created a Master Chief character, and then an Elite alien for the Spartan warrior to shoot at. The characters were crude because the machine only had 128 bytes of RAM.

It was something of an art to make a game with so little resources. Fries decided to work on a full game but forced himself to do it within 4,000 bytes of memory for all of the screens and objects. He tried to make a level with a Warthog, a vehicle from Halo, but it wasn’t fun and it took more than 1,000 bytes so he trashed it. He tweaked the game a lot and had a number of game industry friends playtest it. He added a “legendary” mode for players to replay the game after they beat the final boss, only in a much tougher setting.

The code is available at AtariAge’s web site and the game’s Facebook page is here. It is available for free in an emulator, which reproduces the screen of the Atari 2600 on a modern computer. The label was created by Mike Mika. A limited number of cartridges are being given out at the Classic Gaming Expo. With more than 30 million Halo fans worldwide, and many of them classic game fans, it will be interesting to see how much this retro game gets played.