In May, we reported that Google’s Android platform outsold Apple’s iPhone in the first quarter of 2010, based on a report by the research firm NPD Group. Now the Nielsen Company is reporting that Android has once again outsold the iPhone — this time, for the second quarter of the year.

And if that wasn’t enough good news for Google, it appears that worldwide Android sales have increased 886 percent since this time last year, according to the research group Canalys.

Nielsen’s data positions Android as the second best-selling mobile platform in the U.S. with 27 percent of new subscribers, compared to the iPhone’s 23 percent. Research in Motion’s BlackBerry platform remains at the top with 33 percent.

Android’s adoption among new subscribers has skyrocketed since the fourth quarter of 2009 (see the “6 month recent acquirers” chart below), when Verizon introduced the Motorola Droid with a massive $100 million marketing campaign. Android had a mere 6 percent of new subscribers then, but that number jumped to 17 percent in the first quarter of 2010 and now sits at 27 percent. Meanwhile, the iPhone’s new subscriber numbers have been in steady decline since fourth quarter ’09 — going from 34 percent then, to 24 percent now.

The iPhone still leads in user loyalty though. 89 percent of iPhone owners say that they want to stick with the platform, while only 71 percent of Android owners want another phone with Google’s OS. Not surprisingly, BlackBerry users are the most disloyal — with 29 percent desiring an iPhone next, and 21 percent hankering for an Android device. RIM needs to step up its game soon with BlackBerry OS 6 and its new BlackBerry 9800 (both potentially being announced tomorrow) if it wants to retain its market lead.

Canalys’s numbers show that Android’s success isn’t just exclusive to the U.S. Nokia retained its top position with 38 percent of the global smartphone market, but its 41 percent growth over last year looks positively puny compared to Android’s 886 percent gain. Android, of course, had to start from having no market penetration over the past few years, so it’s much easier for it to show massive gains compared to more entrenched competitors like Nokia.

In our previous report based on NPD’s numbers, Android had claimed 28 percent of new subscribers in the first quarter of 2010, while Apple had 21 percent. Now that we have two reports of Android outselling the iPhone from different research groups, it’s safe to say that Google’s platform has successfully defeated Apple when it comes to new subscribers, and that it has a definite shot at toppling Apple’s total subscribers (and possibly even RIM’s) within a year or two. 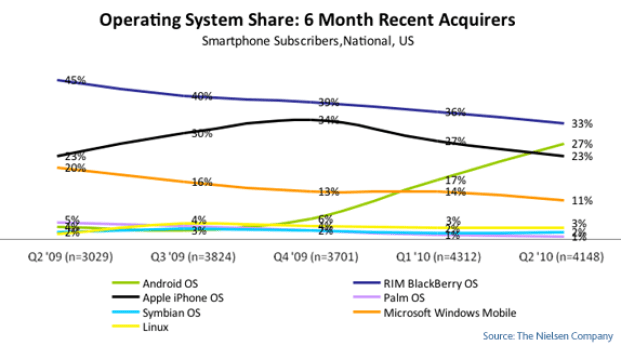