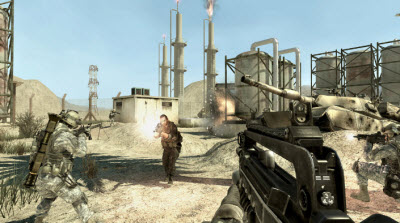 The day has come when sales of map packs — or downloadable add-on products for multiplayer online games — for a game are an even bigger blockbuster than most games themselves.

Activision Blizzard announced today that the Call of Duty franchise has now sold more than 20 million units. At $14.99 per map pack, that’s around $300 million in retail revenue. That’s got to be the biggest map pack sales ever; it makes sense, as Modern Warfare 2, the latest installment in the Call of Duty franchise, has sold well over 20 million games, generating revenues well above $1 billion.

By comparison, big budget console games would be lucky if they sold 2 million units at $60 each, generating maybe $120 million in retail sales. Map packs are much cheaper to produce than actual games, though. So Activision Blizzard is very likely enjoying a healthy profit margin on every map pack sold over online game services such as Xbox Live and the PlayStation Network or PC.

While console sales may be slowing down, sales of downloadable digital content for the consoles and PC games are clearly growing. On Xbox Live, Microsoft gets to keep 30 percent of the transaction fee for games and game content downloaded over its online gaming service. If we assume Xbox Live got half of the 20 million downloads, that means Microsoft’s share of the transactions is about $45 million. It thus is becoming clearer why Microsoft’s Xbox Live business has become a money maker for Microsoft’s game division.

One of the good things about map packs for Activision Blizzard is that they extend the life of a game. One of the bad things for rival companies is that it means some of the biggest game fans will be tied up playing an older game — Modern Warfare 2 launched in November — instead of trying out new games.

Activision Blizzard will report its earnings for the second calendar quarter on Thursday. Analyst Michael Pachter at Wedbush Morgan estimates the company will report revenues of $715 million for the second fiscal quarter ended June 30. He believes that Activision Blizzard could grow revenues for Modern Warfare 2 further by launching a subscription for the online game sessions, which to date have been free, with a purchased copy of the game.

The most popular add-ons are the two map packs for the Call of Duty Modern Warfare 2 game, the first-person shooter which has become the most popular video game in history.

The most recent map pack was the Call of Duty Modern Warfare 2 Resurgence pack, released on June 3 on Xbox Live and in early July on the PlayStation 3 and PC.