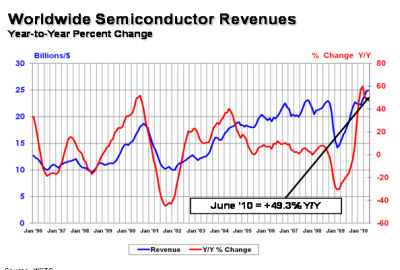 Global chip sales rose 45 percent from a year ago as a general recovery in electronics continued, according to the Semiconductor Industry Association trade group.

For the first half of the year, sales were $144.6 billion, up 50 percent from a year ago when sales were $96. billion. Brian Toohey, president of the SIA, said sales were strong in a broad range of markets. He said the SIA expects sequential growth will moderate in the coming months. Overall growth for 2010 is expected to be about 28.4 percent.

Macroeconomic factors such as consumer confidence, job growth, and overall economic growth will be the factors to watch in the second half, as economists are warning of a slowdown in those areas. On a sequential basis, growth was strongest in Asia Pacific, which was up 23.2 percent in the second quarter compared to the first quarter. The Americas grew 11. 8 percent, and Japan was up 17.9 percent. But Europe was the laggard, up only 0.5 percent.