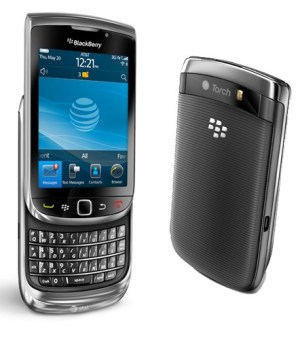 We knew that BlackBerry-maker Research in Motion was going to announce something big at its joint AT&T event today, and it certainly didn’t disappoint. The company unveiled its latest flagship device, the touchscreen BlackBerry Torch, which will be available on AT&T August 12 for $199 with a two-year contract and will be the first device to run its new BlackBerry 6 operating system.

After striking out twice with the touchscreen BlackBerry Storm, RIM has gone back to the drawing board and created a device that combines the brand’s beloved hardware keyboard, with a more modern touchscreen design. The Torch features a slide-out keyboard (so it’s only accessible when necessary), a 3.2-inch touchscreen, and an optical trackpad. With the keyboard folded up, it looks like a typical touchscreen smartphone — but with the keyboard out, it’s unmistakably BlackBerry.

Other hardware includes a 5-megapixel camera with flash and geolocation capabilities, 4GB of on-board storage and a 4GB SD card, 802.11N WiFi support, and a quadband 3G radio so that it functions seamlessly on international cellular networks. The Torch also features a surprisingly low 480 by 360 display resolution — something that was probably done for app compatibility reasons, but pales in comparison to even low-end Android phones.

BlackBerry OS 6 introduces universal search — which lets users search their email, feeds, and pretty much anything on the device, as well as the web — and a universal inbox that combines email with social networking updates from the likes of Twitter and Facebook. There’s also a unified social feeds app that combines RSS, Twitter, Facebook, and Google Talk — which I assume is a more robust way to view those updates than the unified inbox. The home screen has also been revamped with support for more content — including individual contacts and bookmarks — as well as notification previews.

In terms of media, there’s a podcast application that lets you subscribe and download podcasts wirelessly. RIM also added WiFi music sync, thanks to an updated desktop application. The application syncs files, as well as the overview of your entire music catalog. When away from home you can tag a song that isn’t synced on your device, and it will be instantly synced when you return to your home network. 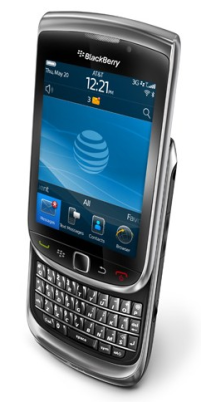 With the OS comes a new focus on mobile apps for the platform. RIM says they will be easier for consumers to find, as well as easier for developers to create and make money from. The Torch will feature a new version of the BlackBerry App World application with support for carrier billing. Developers will be able to use other payment models with the new BlackBerry Payment Service, and there are also new ad service APIs that will make it easier for developers to plug ads into apps.

The new BlackBerry 6 browser is based on WebKit — the browser framework used on the iPhone’s Safari mobile and Android’s browser — with full support for HTML5. Developers will also now be able to make apps using HTML5 and CSS — making them much easier to build than ever for the platform — and those apps will still be able to take advantage of native app functions like being able to run in the background, access local files, and use location services.

Both the Torch and OS 6 seem like major improvements for RIM, but I also can’t help but feel like everything we saw today came a year too late. While RIM was working on this device, Android has skyrocketed in popularity, and Apple introduced its most polished iPhone and mobile operating system yet. Neither the Torch nor OS 6 is the revolutionary upgrade that RIM needed to stay innovative. Now, it’s merely keeping up.