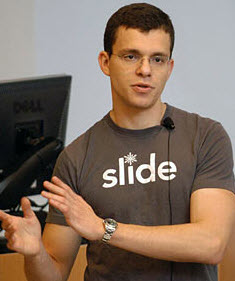 As it tries to move into social games, Google has reportedly agreed to buy app maker Slide for $182 million, according to a published report.

TechCrunch reported that the deal is expected to be announced Friday and that Google will make more moves to create a social game and app strategy to compete directly against Facebook. (Business Insider has a source saying the price was actually $228 million.) Google is also in the midst of making a $150 million investment in Zynga, a fact which was partially confirmed by Google chief executive Eric Schmidt.

Google has reportedly been developing a social network to compete with Facebook, with games as a key feature. Social games like Zynga’s FarmVille dominate time spent by Facebook users, and they’re thought to be a key feature of Google’s effort.

Slide once dominated the top apps on Facebook with silly apps such as SuperPoke, which facilitated virtual sheep tossing at one’s friends. Slide raised $50 million in 2008 in a deal valuing the company at $550 million. But now it ranks at No. 14 among top Facebook app makers, with 14.6 million monthly active users, according to AppData.

It’s not clear if Slide founder, Max Levchin, will join Google. Levchin was a cofounder of PayPal and he has said numerous times that he hoped Slide would be more valuable than PayPal, which eBay bought in 2002 for $1.5 billion.

If the 2008 investors, which included mutual-fund giants T. Rowe Price and Fidelity, got standard terms on their preferred shares, it is likely that they’ll get $62 million back in the deal, leaving $120 million for Levchin, Slide employees, and other investors. However, that’s a back-of-the-envelope estimate, and deal terms vary widely. Lily Lin, a spokeswoman for Slide, did not immediately return comment. We’ll update our estimate as we learn more.