Yesterday, IGN, one of the biggest gaming and entertainment news sites on the Internet, announced that they would be changing their 100-point review scale which they have been using for the past ten years, and replacing it with a 20-point review scale. In other words, gone are the days when IGN gave games 7.9's and 0.1's and 8.3's, and now is the time of 8.5's and 9.0's, without anything in between. The first example of this is the Starcraft 2 Review that they recently posted, where there is not a .1 or .7 in sight.

You may say "But there are a lot of sites who don't use that scale. Even Gamespy, part of the IGN Network uses a 5-Star Scale. IGN changing it isn't major." I'd reply that that is true, and that I'm not here to talk about IGN's changing ways, but rather review scores in general. You see, we have so many different scales, from stars to points and even no review scores on certain sites, its hard to figure out what means what. Is a 0.5 so different from a 1.0, or is a 1 Star game, so different from a 1 And a Half Star Game? 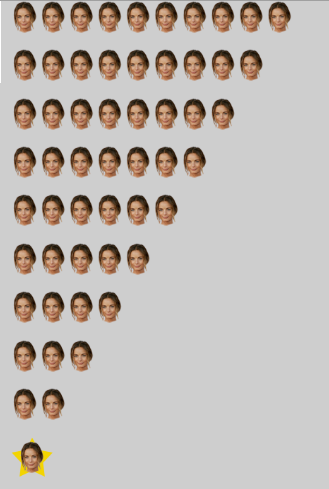 So let's take a look at the different review scales that you may find while roaming the endless expanse of gaming review sites. Gamespot uses a 20-point scale, from 0.0 to 10.0, with only .5 intervals in between. As I mentioned earlier IGN now uses a similar scale. Gamespy uses a 5-star scale, from 0 Stars to 5 Stars, with Half Star intervals. 1UP uses a Grade Scale while Giantbomb uses the same 5-Star Scale that Gamespy does. Of course, we can't forget the mythical, magical scale that certain fans of a certain podcast use. The picture to the right should show you exactly what this scale, only known as the Gabrielle Anwar Scale, is.

All these scales have one thing in common. They don't give a conclusive criticism for the game at face value. They never will, its just the way that works. Sites provide those scores so that their viewers can see the score, and decide to pick it up, or not to pick it up. Even the reviewers on the aforementioned sites have said that half of the visitors to reviews won't read the text. I'm guilty of it, and I would suspect that you the reader, is guilty of it too.

Its often said, "There's no definitive way to rate a game." You can give the Sound of a game like Starcraft a 9.0, but how did that score come to be? Why and how were the points deducted? Was that one missed note in the opening theme (Even though there most likely wasn't, I'm not saying that the Starcraft theme is flawed, don't eat me.), worthy of a deducted .1? There's no conclusive formula, no rule book applicable. Sure you can deduct points for graphical glitches and plain ugliness, but when you're talking about a top class game in terms of graphical presentation, how do you differentiate that 9.0 from that 9.1? I would suspect for any reviewer, since, to be truthful, I don't have experience in the field, that it's practically impossible. There's just so much to take in in any game, that its impossible to get that score exactly right, because there's no textbook or formula to help you along.

Of course, just having a scale doesn't help a lot either. No it does not. Or even doing reviews, that isn't a nice thing to do. That is all because of one word. One, dastardly word that every gaming journalist should dread…Comments *Shudders*. In the gnarly world of comments, there is this:

Then there is this:

And then *Sigh* there is this:

Ah review scores, spinners of chaos, and weavers of armageddon.

Stephen Barry is a fairly opinionated gamer with a yearning to write…and rant, or a combination of the two. He also tends to get angry at people who complain about Nintendo's trend of systems with not-so-great graphics. Take that how you will. So if you ever read an article by him, expect one of two things: A rant or discussion about a relevant gaming topic, or hating on Ninten-haters.