Editor's note: Richard takes a humorous look at the lighter side of glitching. I have to agree; sometimes a broken bit of code can make for a good story. If nothing else, Donkey Lady was pretty damn funny. -James 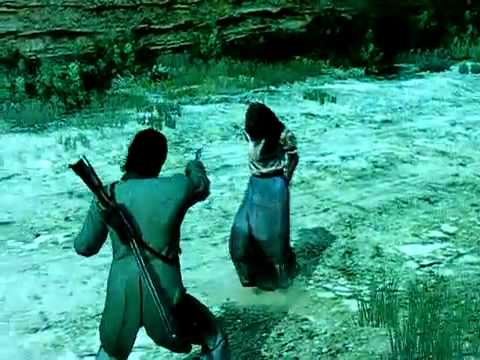 Have you ever seen something in a game that was so ridiculous you wish you had a video to prove you weren't making it up? You know, like that Donkey Lady video from Red Dead Redemption. I've had several of those experiences and have lived to tell the tale almost every single time. I totally wish I had videos, though, because a video is worth not having to type a thousand words. Sadly, I don't, and nothing you can say will ever change that, so you might as well never say anything ever again.

Being a manly man, I used to play The Sims a lot. The way I played was as more of a passive observer, though. I would manipulate things once in a while if I felt it would produce interesting results, but mostly I just sat back and let the Sims do their thing. Through this method of play, I bore witness to an old man screaming Simlish obscenities at his lawn flamingo and a son eating the very hamburger his father had just peed on.

I always tried to use different characters in different settings. A single mom in a single-room apartment, a gay couple living in a hedge maze, and a family of eight living next to a wall with a toilet attached to it were just a few of the victims of my voyeuristic, torturous amusement. My favorite, however, was a young bachelor, who was interesting for one simple reason: I think he had obsessive-compulsive disorder. 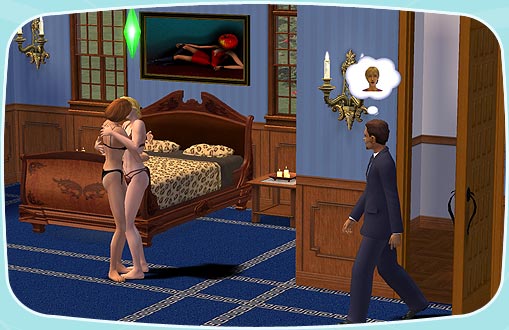 I don't know how I managed to give this particular Sim OCD — it wasn't my goal at all — but it happened. The game began simply enough. I used a cheat to give my Sim more money than he would ever need and built him a beautiful mansion to live in. It got weird pretty quickly; the first thing he did was head for the bathroom to wash his hands. Fair enough, I thought. He doesn't want to soil his new possessions with his grubby fingers.

He wandered around for a while longer, gawking at things, spewing gibberish, and making what looked like sexual gestures at the pinball machine. Then it was off to the kitchen for a delicious meal of potato chips! First though, being the prudent son of a bitch that he was, he washed his hands. Only then was he truly ready to gorge himself on potato chips for a good in-game hour. Upon satisfying his hunger, he washed his hands again. Sure! You have to get that chip grease off your fingers, right? Then it was off to the library to read a…nope. It was time to make a pit stop at the bathroom.

With his newly twice-clean hands, my Sim continued on to the library and sat down with a book. Twenty in-game minutes later, he was up and heading back to the bathroom. After washing his hands yet again, he sat down on the toilet, and I watched him poop — like any good omnipotent god would. He gave the toilet a flush and hopped into the shower. Upon emerging, he washed his hands. Then he went to bed.

The next morning came quickly because I demanded it! This is where the story turns mega-exciting. He got up and went to the bathroom to wash his hands! Then it was outside to stomp on roaches with his bare feet for about an in-game hour before finally heading back in to wash his hands again. You'll never guess what happened next. He washed his hands again! And again. And again. And again! Once he finally got all the skin off his hands, he decided it was a good time to set fire to the kitchen. Nobody really knows what happened to the young man after that, but people say that if you go to the vacant lot and stand where the kitchen used to be, you can still smell fire mixed with a hint of lemon and hear the sounds of someone washing their hands. 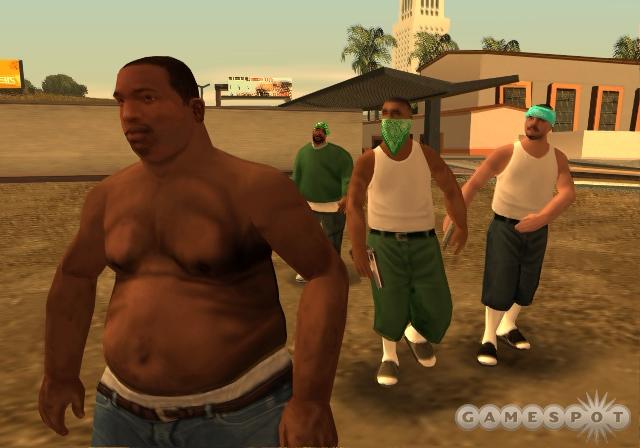 Do you know what's more fun than clean hands? Violent, explosion-y death! So it's off to San Andreas for a luxurious, country-side bicycle tour. But you don't have to give your left testicle to go on this tour. You just have to give me your time, and I tell you a tale so epic that your left nut will rocket away from your body and ricochet off an old lady's head — or something. I'm not sure, actually. I'm too unfunny to care that my jokes suck.

C.J. was once like you: young, black, and able to leap over vehicles and small houses with his BMX. Just your average homeboy enjoying the wind in his flat-top and the rush of adrenaline as he accidentally ran his bicycle off a cliff every 20 minutes. One day, however, things changed.

C.J. was riding his bike toward a local farm when he received a call on his mobile talking-device unit, which he promptly answered with mouth words. Nobody knows or cares what the conversation was about because suddenly a plane came careening out of the sky and crashed in to a nearby barn. What happened astonished C.J. so much that I idiotically slammed him into a parked truck. Then I laughed about it because I am such a good digital friend.

To be sure, it was an exciting time, but C.J. had to get back to work. The countryside wasn't going to explore itself via man-powered vehicle, and if it was, it certainly wasn't going to tell me about it. About 30 minutes after the Flying Barn War, C.J. received another call on his portable long-distance communication object, and everyone was — holy crap! Another plane! This time the wing clipped C.J., knocking him off his bike. Then it slammed into the ground, slid off the side of a cliff, and gracefully landed upside down in the water below. 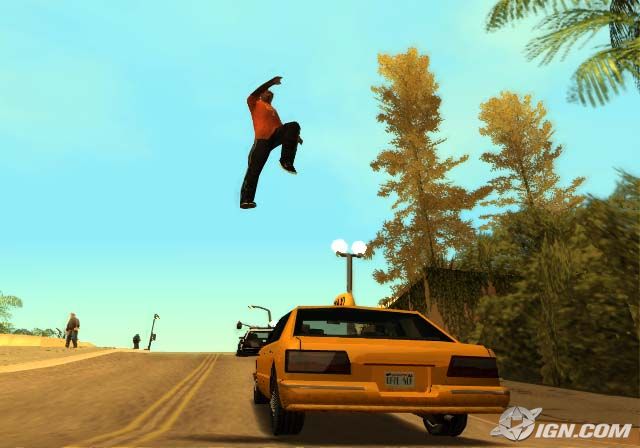 What was going on here? C.J. didn't seem to care, so the following day he went right back to work doing whatever the hell the story of San Andreas is about. It was late morning, and C.J. had just left his favorite establishment: the gun store. Walking down the street, he received yet another call on his talky box. For dramatic effect, I turned the camera so that he was walking toward me as he spoke.

In a twist as surprising as the end of an M. Night Shyamalan movie, the largest plane yet swooped in for the kill. It's target: the very same Ammunation store C.J. had just exited. Since the buildings in San Andreas are made of adamantium, the plane's futile attempt was cut short as it fell straight down onto the packed city street below. Explosions rocked the world, fire ripped through the city streets, and people screamed in terror and agony. The cars near the plane blew up, which caused a chain reaction of exploding cars to roar down the street, flinging charred corpses left and right.

It was delicious, and the icing on the cake was that C.J. was still walking away from all the explosions and chaos without looking back. He looked every inch the bad motherfucker I had signed up to abuse and humiliate. It was epic as hell. If only I had a video….

My point is that these kind of crazy-ass emergent experiences are some of the best moments I've had in the way-too-many hours I've spent playing video games, whether they come from bugs in the code or are simply side-effects of a complex rule sets interacting in ways nobody could have anticipated. I would hate for the insatiable desire for more intensely polished products to destroy the limitless possibilities of sandbox games. Tons of fun can come from a game thrusting something unpredictable onto the player. The Donkey Lady is irrefutable proof that my vapid, meaningless point is true.