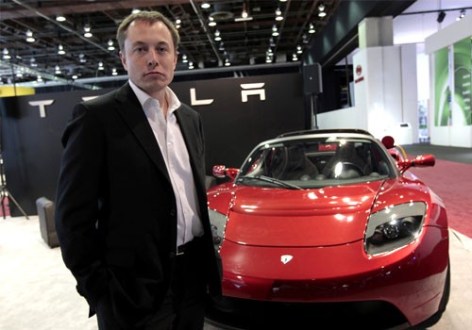 As predicted, Tesla Motors posted higher losses for the second quarter during its earnings announcement today — its first as a public company. The electric vehicle maker says it brought in $28.4 million revenue, but lost $38.5 million ($5.04 a share), up from the $29.5 million lost last quarter and $10.8 million last year.

Considering that the Palo Alto, Calif. company just purchased a major automotive plant in Fremont, Calif. for $42 million and is scaling up development of its Model S sedan, the loss was expected. The company cites its 5.4 percent growth in revenue for the quarter (ended June 30) as a sign that it’s still on track.

Tesla went public at the end of June, making it the first automotive company to do so since the Ford Motor Company in 1956. It sold 13.3 million shares and raised $226 million in one of the most successful IPOs this year and the only blockbuster offering in the cleantech sector.

Shares of TSLA closed at $21.26 on the Nasdaq, down 3.14 percent today. Its stock originally priced at $19 and was expected to dwindle as the IPO buzz died down, but it’s remained fairly resilient.

Tesla has been very clear that it doesn’t expect to turn a profit until the Model S is released in 2012. It doesn’t have another major product launch planned for the interim and says it will spend close to half a billion dollars on development over the next 10 to 12 quarters.

That said, CEO Elon Musk assured investors in a Bloomberg Television interview earlier today that the company has enough runway to launch the $57,400 sedan, which should cost about $400 million to get to market.

Many critics doubt that Tesla will be able to hit its 2012 deadline for the new car, arguing that its prior vehicle, the $109,000 Roadster, endured several delays. But the company says that the Model S is on track so far, with prototypes for its powertrain and battery already undergoing in-house testing, and the recent finalization of its external design, which has already been released to external parts vendors.

The immediate goal is to get an alpha version of its Model S out the door, which will have 8o to 90 percent of features in common with the finished product. To this end, the company says it has already sourced certain parts of the car, including the seats, seat belts, wheels, tires and 17-inch touchscreen.

The sedan is unique in that Tesla will be building the car’s body in addition to the battery pack and powertrain. In the past, its Roadsters’ chassis were supplied by Lotus.

While the Model S inches ahead, the company is relying heavily on its Roadster business — about $23.9 million in revenue came from automotive sales alone in Q2. According to Musk, the second quarter saw a jump in Roadster orders, bringing them to their highest level since the record-setting third quarter of 2008.

The company launched its Roadster 2.5, featuring brand new creature comforts, at the start of July and has opened three new showrooms in Copenhagen, Zurich and Newport Beach, Calif. since. It expects to open other locations in Tokyo, Paris and Milan by the end of 2010.

Also helping the company along are close partnerships with major manufacturers Toyota and Daimler. Both own significant minority stakes in the company. Toyota — which invested $50 million after the IPO — and Telsa recently announced that they are partnering to build an all-electric version of Toyota’s RAV4 SUV, with two prototypes already delivered. On top of that, Tesla will continue to supply lithium-ion battery packs to Daimler for its line of electric Smart cars and forthcoming A-class electric vehicles.

In preparation for today’s earnings statement, Musk sat down with Bloomberg Television to address his skeptics and discuss how Tesla plans to reach its milestones without seeking millions in additional funding. Predictably vague, the CEO said he is very confident that the Model S will make its debut in 2012, and that the company will be able to churn out 20,000 vehicles a year in the near future.

When asked how Tesla will avoid hitting the same walls as prior electric vehicle initiatives, Musk said the company plans to approach the business from an unprecedented angle. Its mission has largely been to apply a capital-efficient internet strategy and sensibility to the automotive world.

“If you look at the EV1 by General Motors [produced between 1996 and 1999], they spent over a billion dollars on that program to bring a small number of cars to market with specifications much lower than our Tesla Roadster,” Musk said. “What car companies say they will do in two or three years’ time doesn’t even equal what the Roadster did two years ago.”

Bloomberg reporter Willow Bay noted that Musk’s bravado, lofty claims, and radical decisions (to go with the Fremont plant instead of another in Downey, Calif. at the last minute, for instance) have drawn comparisons with ill-fated 1980s car manufacturer John DeLorean.

Apparently, Musk laughed off the comment, saying only, “If I had a dollar for every time someone brought up DeLorean, I wouldn’t need an IPO.”

Here’s the full Bloomberg interview for those who are interested: