Editor's note: Joe uses a pretty infographic of game-related tweets to propose a weighty theory about why we play games. What do you conclusions do you draw from the image? -Brett 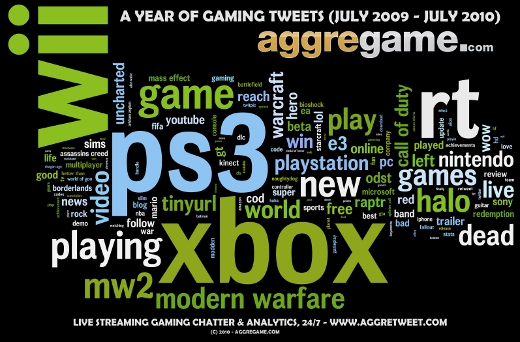 Aggregame, a social platform for video games, recently released the results of aggregating a year of gamers' tweets in the form of a pretty infographic. Clearly inspired by tag clouds that visualize the popularity of tags used in blog posts (the larger the word, the more frequent the tag), Aggregame's infographic states the obvious while also revealing some provocative information about what motivates us to play video games.

For example, while it's clear that the console wars have invaded the Twitter stream, frugality has not. The words "sale" and "deal" appear, but they're miniscule compared to buzz words like "trailer," "beta," and "E3." This suggests that Twitter users serve as free promotional tools for the industry. (Note: Aggregame's study does not provide context for the tweets, so these are purely inferences.)

But don't count out your fellow gamers as mere cogs just yet. "Live," "dead," and "life" are some of the most popular gamer topics on Twitter according to the image, larger than nearly every buzz word or specific title aside from Halo and Modern Warfare. Could it be that Twitter is acting as an outlet for the collective unconscious of players? 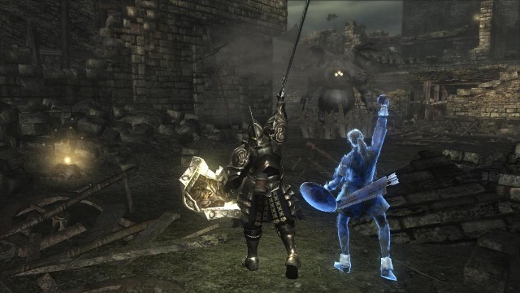 Demon's Souls' gameplay revolves around the concept of death.

Death in video games is something that frustrates and upsets us, yet in most cases it's a necessary evil ("'evil" showed up on Aggregame's graphic as well). Games that try to suppress the pressure of death often face backlash, such as with Ubisoft's reimagining of the Prince of Persia franchise in 2008. Yet death remains one of the most stressful aspects of gaming — perhaps why is Demon's Souls is both acclaimed and bashed for its punishing approach to death.

Perhaps games, during their short existence in the world of global media, have become an ideal tool for expressing and exploring what nags at the back of society's collective mind: death. It's the unknown that generally frightens us — and what do we really know about death, other than the fact that it happens?

Religion began as an attempt to explain life's mysteries through faith in something greater, while philosophy has tried to understand life and death through logic. Media such as music, film, and literature attempt to explore it abstractly. Into this mix comes the video game, a medium that we can actually interact with. Perhaps what motivates us to play games is the collective unconscious screaming out, demanding answers.

Death is rarely talked about outside of gallows humor, somber conversation, and condolences. Perhaps after dealing with it for so long in the virtual space, gamers on Twitter are ready to discuss death openly. Or maybe they just want to let off some steam after being fragged for the thousandth time in Halo.

This has been an installment of Dialog Tree, where we discuss the finer topics concerning video games, technology, and other issues your less geeky friends don't care to talk about. Have questions or something you'd like to see discussed? Let me know in the comments! (Note: These posts originally appear every Monday at Geekadelphia.)