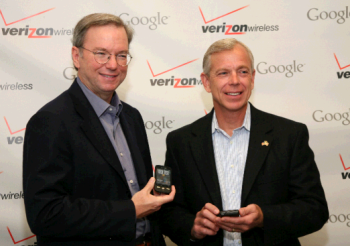 Google and Verizon have denied a New York Times report, published yesterday, that claimed the companies are nearing an agreement for Google to pay Verizon to speed up internet access to its services.

The agreement, if true, would have run counter to Google’s long-standing support for network neutrality — the idea that all web traffic should be treated equally by internet service providers. Many were incensed by the news, since it was clearly out of character for Google.

While the news of the agreement is suspect, we do know that the two companies have been discussing net neutrality for some time, according to a statement earlier this week by Google CEO Eric Schmidt (pictured above with Verizon Wireless CEO Lowell McAdam at a press conference).

Google’s first official response came from its Public Policy Twitter account: “@NYTimes is wrong. We’ve not had any convos with VZN about paying for carriage of our traffic. We remain committed to an open internet.”

A Google spokesperson later made a similar statement to the Guardian.

The NYT article regarding conversations between Google and Verizon is mistaken. It fundamentally misunderstands our purpose. As we said in our earlier FCC filing, our goal is an Internet policy framework that ensures openness and accountability, and incorporates specific FCC authority, while maintaining investment and innovation. To suggest this is a business arrangement between our companies is entirely incorrect.

At this point, it seems like the New York Times may have misunderstood some information it received about a potential Google and Verizon deal. Bloomberg published a similar report today, which states that the companies have reached a deal that would bar Verizon from slowing down certain web content on its FiOS fiber internet service, but would leave it free to limit traffic on mobile devices.

With so much rumor and speculation swirling about, I expect we’ll hear a lengthier response from Google on the matter soon.