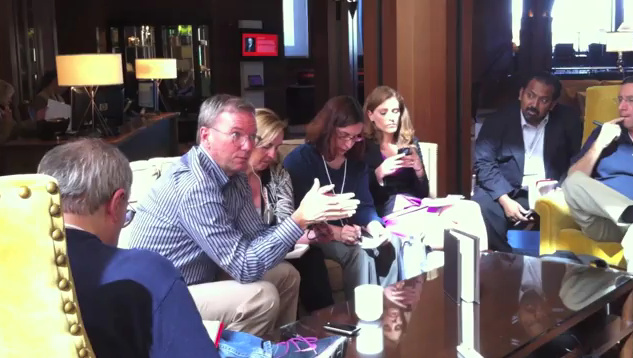 Google’s Android platform has gone from activating 100,000 units a day in May, to 200,000 daily units as of today, according to Google CEO Eric Schmidt.

Schmidt was speaking to journalists (pictured above) at the Techonomy conference in Lake Tahoe, CA, and the technology blog TechCrunch managed to get some video of the chat (see below).

The activation growth shows impressive progress for Google’s mobile OS in the span of just a few months. Schmidt pointed to recent quarterly shipment numbers that showed Android phones outselling the iPhone in the last quarter as proof and said that he confirmed the number with Google’s own internal figures.

Schmidt listed the success of the Droid X as one of the driving forces behind Android’s continued popularity and mentioned that he was excited about Samsung’s Galaxy S phones, since they’ll be available on all carriers.

The news coincides with a recent report by research firm iSuppli, which predicts Android phones will beat out the iPhone in total market share by 2012. By that point, the firm believes, Android will be used in 75 million smartphones, while iPhones will only account for 62 million. “While Apple’s family of iPhone products continues to be the standard by which all other smart phones are measured, the proprietary nature of the iOS and Apple’s closed system business model will limit the number of smart phones with the operating system,” iSuppli’s Tina Teng writes.

Given the other recent report that Android has overtaken BlackBerry as the top-selling smartphone platform for the last quarter, iSuppli’s prediction doesn’t seem that far-fetched.

Check out Schmidt speaking to the press about Android’s success below:
[youtube=http://www.youtube.com/watch?v=AYO7ZQ3JQmI&w=629&h=379]