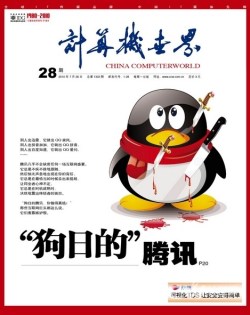 Though copying of both foreign-made and Chinese-made games is rampant in China’s social games industry today, that’s not what will drive the industry forward.

That barb, rare at a Chinese conference like the recent ChinaJoy event, prompted a round of applause. The issue of copying is a common one in game industry history, with the likes of Zynga, Electronic Arts, and Activision Blizzard being blasted for it at some point or other.

Tencent, a Chinese internet giant with a dominant instant messaging service and popular social network, has come under heavy fire for copying and pushing out smaller players. The magazine China Computerworld went so far as to publish a controversial cover story called “F**king Tencent,” with a picture of the Tencent Penguin stabbed with knives, writing:

Tencent is never the first to “eat crab” [to try out new things]. It looks for a space in a mature markets to shove its way in. However, the methods it chooses also invite controversy: imitation, sometimes unscrupulous “shanzhai” copying.

As early as 2006, Sina founder Wang Zhidong openly accused [Tencent founder] Ma Huateng of being the industry’s “plagiarism king,” and of brazen plagiarism at that.

Tencent’s speaker was up next and did not let slight pass unnoticed. Peter Zheng, General Manager of the Qzone Social Network Product Center, responded that at least Tencent did not copy its entire social network from Facebook, referring to the fact that RenRen’s design and features, down to the shade of blue, are remarkably “similar” to Facebook.

China’s social networks are experimenting with open platforms, but all still produce their own games, many of them knockoffs of other popular titles. Despite ostensibly striving to create an ecosystem of third party developers, RenRen itself has released RenRen Farm and RenRen Restaurant (a ‘faithful’ copy of Playfish’s Restaurant City), the second and fourth most popular games on the network, respectively. Upset developers allege that the network privileges its own games by allowing them to send out more viral notifications to users.

The power of Chinese social networks means that developers earn zero or low revenue share and therefore struggle to generate significant revenues in the domestic market. Calvin Ng, a CEO and advisor to several gaming companies, says, “But you can’t say that social networks are not making money, when they see a good idea that’s making money they just copy it because they want to make everything.”

At the same time, speakers at the ChinaJoy SNS & Social Game Forum urged social game developers to innovate, rather than release another farm game. It’s common for Chinese developers to download the flash code and then reconstruct a game within two months. But this strategy may not work abroad, where social networks and gamers are seeking original content.

PopCap, a U.S. casual games company with a studio in Shanghai, just announced a pioneering cooperation to release innovative games on RenRen, which will test the success of both original games and foreign developers in China. PopCap’s games, especially Plants vs. Zombies, are widely pirated in China, but the company has not yet been able to make much money in China.

China has onerous rules for foreign developers who seek to introduce their games into the market. Massive multiplayer online games officially require a local partner to handle the distribution of all games, hence Blizzard’s cooperation with NetEase on World of Warcraft. It’s a gray area as to whether a social network like RenRen qualifies as a distribution partner in the case of social games—it seems the rules are still being written.

Despite the current challenges, most of the attendees expect China’s social network to gradually open up more. The social network Kaixin001 recently launched an open platform experiment (it was previously completely closed), which may shift the bargaining power in the relationship. For the same game, average revenue per user is 2-3 times higher on Kaixin001 than on RenRen, according to Hans Tung, a partner at Qinming Venture, which invested in Kaixin001. Tencent’s Qzone also continues to dabble in licensing games, though it offers only “a few cents on the dollar” according to Calvin Ng. If Chinese social networks start chasing developers rather than the other way around, revenue share will surely improve for developers.

Developers are being challenged to create games that are more innovative, targeted, and difficult to copy. If they are able to achieve that, even Chinese social networks should slowly open up.

Kai Lukoff is an analyst at BloggerInsight and an editor on China Social Games http://www.chinasocialgames.com Follow Kai on Twitter @klukoff http://twitter.com/klukoff