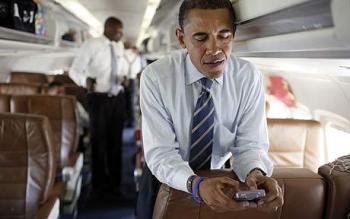 The Obama administration has stepped in to mediate discussions between BlackBerry-maker Research in Motion and foreign governments — including Saudi Arabia, the United Arab Emirates, and more — who want to ban the devices due to security threats, reports the AP.

The UAE and Saudi Arabia were the first to announce that they would ban certain BlackBerry services — the latter’s ban of BlackBerry IM begins today, and the UAE plans to block IM, email, and web access starting October 11. They were driven to block the devices because RIM would not cooperate with giving them access to encrypted customer data. Indonesia, and later India, both announced that they would block BlackBerrys for similar reasons.

State Department spokesperson P.J. Crowley said that U.S. officials were working with the countries and RIM “to understand the security concerns and see if we can’t work collaboratively to find solutions.” The State Department is specifically worried that the bans will hurt American diplomats and businessmen oversees.

Speaking about the administration’s involvement, Secretary of State Hillary Rodham Clinton said: “We are taking time to consult and analyze the full range of interests and issues at stake because we know that there is a legitimate security concern, but there’s also a legitimate right of free use and access.”

BlackBerrys are particularly troublesome for the countries because much of their communications are encrypted and sent to servers in other countries. According to estimates, there are some 500,000 BlackBerry users in the UAE, and 400,000 in Saudi Arabia.