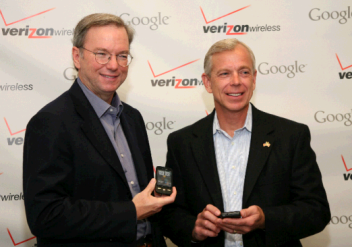 In a last-minute conference call today, Google CEO Eric Schmidt (pictured to the right with Verizon Wireless CEO Lowell McAdam)  and Verizon CEO Ivan Seidenberg joined together to discuss their support for net neutrality, or the idea of an open internet.

The call was a response to reports from last week that the companies were nearing an agreement for Google to pay Verizon to speed up internet access to its services. Schmidt claimed that those reports were entirely false, and that there is no business arrangement whatsoever between the companies.

Instead, they’re joining together to promote a public policy initiative that they, and hopefully other companies, will follow. “We need network, and they need the valuable content we provide,” Schmidt said.

The highlights of the proposal are as follows:

– They believe that there should be no discrimination for wired broadband connections — meaning nothing can be blocked, and all blocking is against the rules.

– There should be enforceable transparency provisions for both wired and wireless connections so that “consumers would know what is happening with their service.”

– The FCC’s authority should be clearer, and it should have the ability to charge a $2 million fine against bad actors.

– They want to ensure that the broadband platform in the U.S. gets stronger.

– They want to emphasize the differences between wired and wireless broadband worlds. “Wireless has different technologies, different interplay between different devices and the network,” said Seidenberg. “We’re worried that too many rules will hamper our ability to optimize our network, but a transparency requirement would be a very good thing.”

– They also want to support reform of the Federal Universal Service Fund so that it supports broadband deployment.

Before anyone could ask, Seidenberg explained why Verizon is working together with Google on the policy initiative: “There’s been so much discussion of this issue, that we feel this debate has been hijacked by issues that’s not reflective of what the company’s doing. We support the FCC, we built a fiber network, we built a wireless network, we purchased spectrum and agreed to open-access.”

In the question and answer period, Schmidt clarified that there will be “no prioritization of traffic coming from Google”, and that they “like the public internet.” Google will also be monitoring Verizon to make sure it sticks to the outlined rules. Schmidt reiterated that both companies have been in discussions for over a year, and that they’ve already had discussions with the FCC.

Seidenberg also clarified why wireless networks need more flexibility than wired connections: “If we have to prioritize voice traffic in an emergency or kill spam, network operators need flexibility. It’s not about services.” Verizon has no intention of blocking bandwidth heavy applications — as long as they’re lawful and not damaging the network.

When asked if other companies will follow suit, Schmidt said: “We’ve talked to our other colleagues and we think they should follow our policy. We think this moves the ball forward, and we hope others will see this the same way.”